Actress Kangana Ranaut has lashed out with strong words at what she refers to as the Nepo Mafia of Bollywood, saying it has dismantled the ambitions of upcoming actors and struggling outsiders. 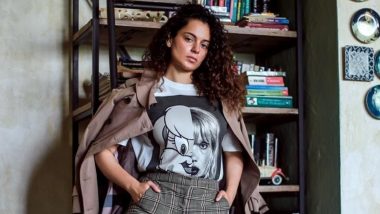 Actress Kangana Ranaut has lashed out with strong words at what she refers to as the Nepo Mafia of Bollywood, saying it has dismantled the ambitions of upcoming actors and struggling outsiders. Kangana, who has consistently voiced her views on the untimely demise of actor Sushant Singh Rajput, has openly spoken about favouritism in the Hindi film industry towards the star kids, by the "gangs" of Bollywood, which she has often tagged as "movie mafia" and "Suicide Gang" of the industry. Anurag Kashyap Claims He Helped Aanand L Rai When Kangana Ranaut’s Tanu Weds Manu Was Stalled (Read Tweets)

Opening up on the subject, Kangana told IANS: "Well, for now it has taken a life, many careers… it has just dismantled the very ambition of upcoming actors and struggling outsiders. It has caused a lot of damage. How to dismantle it? We need to talk about it. In many ways it will prepare outsiders." She added: "Eventually, when a single human being -- talented, extraordinary, genius -- is suppressed to death and killed systematically for petty egos, for petty gains, the offenders don't have a happily ever-after. It's not a world they are rewarded for," she said. Simi Garewal Backs ‘Braver & Bolder’ Kangana Ranaut for Being Vocal on SSR Demise, Says ‘A Powerful Person Once Tried to Destroy My Career’

Kangana feels a "collective consciousness" has woken up and people are now questioning the star system that victimises outsiders. "Like I had said, we don't want them to be hanged but they can also not sail through it," she said of the ‘movie mafia'. The actress recalled that she was shocked the most when she read an obituary for Sushant by filmmaker Karan Johar, whom she called "intolerant" towards outsiders and has referred to a "flagbearer of nepotism" who only backed industry kids.

"I mean is he (Karan) planning to make another victim like that? I was shocked. So, they are preparing to continue with this ganging up on individuals, and he is pretty sure that he will face more people like that and at that time he may just reach out to that person," she said. Kangana stressed that the situation needs to end. "I mean, this is so shameless. This needs to stop. They have gotten away from a murder unaffected. So, this is what it will take to dismantle their egos, their control and the fact that they think that money can buy everything, and they are drunk with the power they acquired from their fathers. This will take collective voices of people to dismantle that," she said.

Kangana recently spoke about the lobby culture prevalent in the Hindi film industry, after which various old videos of the actress talking about star children in the industry started doing the rounds on social media. Actress Taapsee Pannu shared one such throwback video of Kangana, where she was seen defending star kids and their privilege on Twitter. Kangana claims she predicted all of it: "So, people are digging up my old interviews. I had already predicted that this is what they will do. Even last time when I had raised my concern about suppression of outsiders in 2016, the whole system attacked me."

"But you notice here also that they are not letting A-listers get affected. The A-listers that the Nepo Mafia promotes are tucked away safely. They are only sending these people who have only and only to lose -- these outsiders who are struggling, who are star-struck by the glamour and the power of the movie mafia."

Kangana agrees that everyone wants to be "accepted". "I do not see it as a negative thing but I can assure you they (Nepo Mafia) will never accept them (outsiders). They will only lose in this," she said. The videos doing the rounds are almost a decade old, said Kangana, who ventured into Bollywood in 2006 with "Gangster". "They are going (sharing videos that are from) 12 years ago. I started 14 years ago, so clearly, I had a very slow launch. After my launch I was jobless for a significant time," she recalled.

She stressed that she had many things to tackle and that the "nepotism mafia came my way majorly." "I was ill-treated and for me the only major difference I had seen was that I was very often humiliated for being an outsider, and the producers would yell at me. They would abuse me, the director would misbehave with me, but I also thought that this was because of the smalltown background and I couldn't speak in English," she said. Kangana feels it was also because she was a teenager when she stepped into Bollywood. "I couldn't slot what it was and I still say that it was a combination of many things. Had I have been from a fancy city or maybe an NRI, I think I would've been treated better," she said.

It was after the success of her film "Queen" in 2014 that Kangana started to feel people were ganging up against her. "The major opposition I faced was when I became successful in 2014 and that's when I started to see the ganging up of enormous proportion. These people are doing (sharing videos) exactly what I had predicted. (They) have simply exposed themselves and it's nothing but heartbreaking," she said.

Kangana says nepotism became "fatal" after talent agencies and production houses joined hands. "Nepotism was at some point just about loving your own. It was about being comfortable with people having a lot more passionate engagement with the ones that are bound by the blood relationships. All that is human nature. I also worked as a director, you hit it off really great with some people you meet. Likeness has its own comfort, when it comes to creative partnership as well," she said.

Things are changing, though, according to Kangana. "You won't go as far as destroying and ruining somebody just because you have a certain likeness for your child, son, sister, brother or friend. It was limited to that kind of nepotism until the talent agencies came in and it all became about contracts. So, whoever has put money on you, they benefit hugely with these events in your life." "So, when talent agencies combined with powerful production houses, it became a toxic combination for talented extraordinary outsiders. That is where it has become fatal. That is where it has become absolutely suffocating, absolutely mafia-like because now money is involved," she summed it up.

(The above story first appeared on LatestLY on Jul 22, 2020 03:52 PM IST. For more news and updates on politics, world, sports, entertainment and lifestyle, log on to our website latestly.com).