A few days ago, it was reported that Kartik Aaryan has collaborated with Gunjan Saxena director Sharan Sharma for a sports drama. Now, as per the latest update, it's actress Tripti Dimri who will be seen opposite Kartik in the flick. Read on. 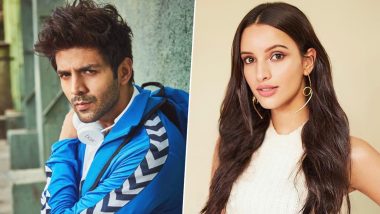 Kartik Aaryan is one of the most bankable stars we have in the business right now. From his earlier days until now, the actor has grown as an artist and that's the best part about his personality. Also, a few days ago, it was reported that Kartik has collaborated with Gunjan Saxena director Sharan Sharma for a sports drama. Not just this, the reports also said that he will play the role of a cricketer in the same. Now, as per the latest update, it's actress Tripti Dimri who will be seen opposite Kartik in the flick. Jacqueline Fernandez All Set To Feature in a Big-Budget Hollywood Actioner – Reports.

Reportedly, the makers have approached Tripti for the role of the leading lady who has impressed one and all with her acting in Bulbbul and Laila Majnu. The movie is said to be bankrolled by Karan Johar. Well, if the report of Kartik and Tripti to be seen together in a single frame is true, then it will be interesting to see both of them for the first time romancing each other. Kartik Aaryan Amuses Fans as He Talks About Coronavirus After-Effects in Latest Instagram Post.

Meanwhile, workwise, while Tripti will be soon seen in Anushka Sharma produced Netflix film Qala opposite Irrfan Khan's son Babil Khan, on the other hand, Kartik has Bhool Bhulaiyaa 2, starring Kiara Advani and Tabu in key roles. So, what do you think about Kartik and Tripti's pairing? Tell us in the comment section below. Stay tuned!

(The above story first appeared on LatestLY on Apr 12, 2021 12:36 PM IST. For more news and updates on politics, world, sports, entertainment and lifestyle, log on to our website latestly.com).