Katrina Kaif Birthday: 7 Dance Numbers Of The Actress That Are Legendary (Watch Videos)

On Katrina Kaif's birthday today, we will talk about dance tracks that have become legendary only because of her. Be it Chikni Chameli or Kala Chashma or Mashallah, nobody can match the finesse and agility this actress brought to these songs 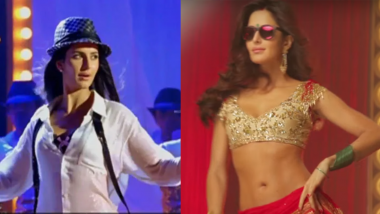 Katrina Kaif celebrates her birthday today. Sexy, sweet, sultry, svelte Katrina is all those things and more. Since her first film, the actress has always been called hard-working. Katrina puts everything into every role she has done so far but what outweighs all that is her impeccable dance moves. This woman is the goddess of dance. Throw her anything and she will turn it into the best dance video you have ever seen in Indian cinema. So on her birthday today, we will talk about seven steps that have become legendary only because of Katrina Kaif. Katrina Kaif Birthday: She’s a Fashion Goddess Whom We Don’t Mind Worshipping (View Pics)

Katrina Kaif dancing like a dream is the single most good thing about this film. She is so effortless in this song. The signature step is still known as the Katrina step.

Katrina makes such a beautiful bride in this song and those abs, sigh! Without her, this song wouldn't have been as popular as it is today.

This time she isn't aided by a plethora of backup dancers. It was just her doing some extremely tough steps in the history of dance songs in India. It was such a powerful display of moves...almost like a warrior in a war.

Ah! What should we say about this song? She was so light on her feet in this desi raw video that it's just unbelievable. No one plays a seductress better than her.

Remember that stomach roll on the ground? We think it's better if we don't try to describe that and just bow down to her. Tiger 3: Salman Khan and Katrina Kaif To Resume Shooting of the Film on July 23 – Reports

Told you, nobody can make you fall in love with her just the way Katrina does. She is sensuous and yet extremely innocent.

Which one is your favourite Katrina Kaif dance number?

(The above story first appeared on LatestLY on Jul 16, 2021 09:59 AM IST. For more news and updates on politics, world, sports, entertainment and lifestyle, log on to our website latestly.com).