Kesari: First Glimpses of Akshay Kumar and Parineeti Chopra Starrer Will Give you Goosebumps! 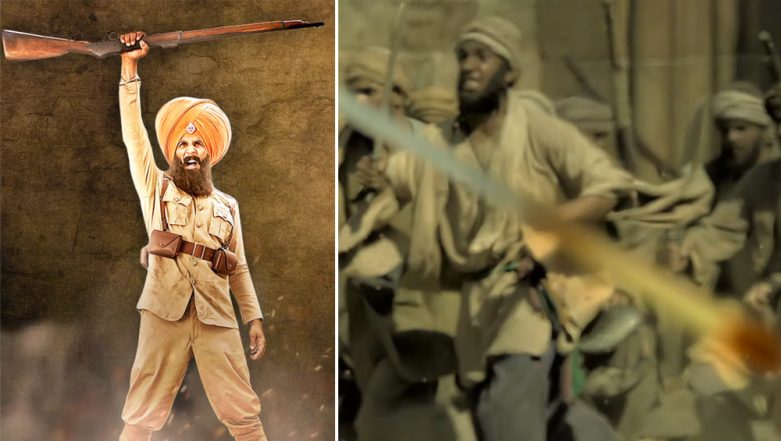 Akshay Kumar and Parineeti Chopra are all set to go all out with the promotions of their film -Kesari releasing on March 21 this year. Dharma Productions announced it earlier that they will be sharing the glimpses of Akshay and Parineeti from Kesari today onwards with the trailer coming out on February 21. So here we go! The makers are releasing these glimpses in different parts and the first and second parts are here. Talking about the first glimpse, the video showcases the beginning of war, the chakram (circular throwing weapon) and a sword which symbolize war. Karan Johar took to twitter to share the first glimpse of Kesari and captioned it as: Presenting the first one from the #GlimpsesOfKesari. Get ready for an UNBELIEVABLE TRUE STORY http://bit.ly/GlimpsesOfKesari1 … #KesariTrailer21Feb". It's kinda intriguing and will give you goosebumps! We have all our hopes pinned on this one.  Kesari: Akshay Kumar Teases Us With This New Poster; First Glimpse To Be Out Tomorrow.

Akshay wrapped up filming of Kesari in December 2018. Since then the movie's post-production work has been going on in full swing to meet the release date, March 21. Talking about the film, and thanking the film's cast and crew, Parineeti tweeted: "Anytime I watched a war movie, it was the love story of those brave men that kept me going. So proud to be a part of this epic experience! Thank you Akshay sir, Karan Johar and Anurag sir for allowing me to be a part of your vision. You all have made one of the most beautiful movies people will ever see." Salman Khan's Bharat, Akshay Kumar's Kesari, Alia Bhat's Gully Boy - 40 Big Bollywood Movies of 2019 To Watch Out For! Vote For Your Favourite.

Check out the first glimpse of Kesari here:

The makers also revealed the second glimpse which is even more impactful than the previous one. Akshay, whose face cannot be seen yet, is burning in flames while he encourages others to fight the battle, like a true leader.

Check it out here:

The makers shared a brand new poster of Akshay Kumar earlier this morning and looks feisty and fierce. We're excited to see Parineeti's look from the film too. Backed by Cape of Good Hope Films and Karan Johar's Dharma Productions, Kesari is directed by Anurag Singh.