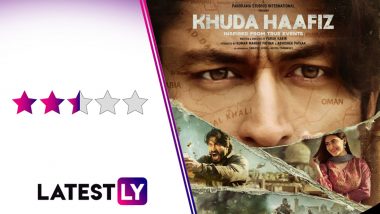 Khuda Haafiz Movie Review: Earlier this year, Tiger Shroff goes to Syria to save his brother from a terrorist outfit in Baaghi 3. In Khuda Haafiz, that is streaming on Disney+ Hotstar, Vidyut Jammwal's character has a similar mission. Only the abductee is his wife and the abductor a girls trafficking circle in a fictional Middle-Eastern country called Sultanate of Noman (?). Both Shroff and Jammwal are known for their martial arts skills, so who wins in their sagas of rescuing people from non-friendly countries? Khuda Haafiz: Vidyut Jammwal Invites Fans to Watch His Film First Day First Show on Disney+ Hotstar With Him and Director Faruk Kabir.

Before you begin to draw comparisons, let's draw the lines between the films clearer as to what makes them distinct. Director Faruk Kabir's film is, surprisingly, far more contained than the bombastic Baaghi 3 and it has a lead actor with more expressions in his kitty than the Shroff scion. That said, Khuda Haafiz is also pretty formulaic, more melodramatic that needed and also very understated than desired.

It is love at first sight for Sameer (Vidyut Jammwal) and Nargis (Shivaleeka Oberoi) even if they meet through an arranged marriage alliance. Their married life is all flowery and idyllic shown through a montage in a romantic song (composer Mithoon has scored some decent numbers here).

Watch the Trailer of Khuda Haafiz:

However, the year is 2008 when the global economic crisis had hit India hard. Both Sameer and Nargis lose their jobs. They seek the help of a seedy travel agent (Vipin Sharma) to secure jobs in the Middle-East. Nargis is the first to get a job in Noman, so she leaves for the country alone, leaving Sameer behind.

A couple of days later, Sameer gets a call from a frantic Nargis, who seems scared and says that nothing here is what they have been told, before she is cut off. Sameer goes to Noman to search for his wife and bring her back, but he soon finds that Nargis has become a victim of a vicious human trafficking circle. With only a kindly local cab driver (Annu Kapoor) to help, it is left upto Sameer to save his wife from the gang in a foreign country with no way out.

Khuda Haafiz has a pretty standard story to say - a template that we have seen in films like Baaghi and Sadak - with some very expected twists and turns. The lack of good surprises is hurting, but the pacing is decent. Also, the antagonists, including a (hardly) surprise third act reveal, are not much memorable or scenery-chewing enough. Even the reference to the 2008 economic crisis doesn't make much importance to the premise, apart from being the excuse to send Nargis to her trouble.

Fans of Vidyut Jammwal's action fare would also be taken back to see how low the count of the kicks and the punches are in the film.

There is a scene when Sameer finally tracks Nargis in a brothel under an alias and the gang-leader tells him that she can only be free after 10 minutes, as she is with another client. We see him get up, crack his knuckles and stand impressively against the white sunlight coming from a door. I waited with bated breath for him to land a hard one on the brothel-owner's skull. To my surprise, it doesn't go that way, even though we get the action bit we needed a couple of minutes later. That scene was proof enough that the makers wanted to keep it restrained, rather than go all-out knuckle-fight. Khuda Haafiz Song Jaan Ban Gaye: Vidyut Jammwal and Shivaleeka Oberoi's Old School Romance Will Soothe Your Heart.

Character-wise, it shouldn't come as a surprise since Sameer is an IT guy with no mention of having, as Liam Neeson puts it in Taken, a 'special set of skills'.

Still, there are a couple of action scenes that do raise the excitement levels, only for one factor or the other to bring it down.

The first major action setpiece is a hand-to-hand combat that follows the aforementioned sequence. It is bloody brutal and gory, and the best action sequence in the film, but is underwhelmed by a melodramatic background score.

Another fight sequence between Sameer and the kingpin (Nawab Shah) that takes place in the kitchen also looked awesome, as they throw forks and knives at each other, while getting slammed on kitchen tops. But before our adrenaline levels rise, it is brutally cut short. The last major setpiece involves a chase sequence across the desert that takes not just inspiration from Mad Max: Fury Road, but also some of the notes from its BG score. Thankfully, the cinematography (Jitan Harmeet Singh) is impressive, and the production design is decent enough.

Maybe it was wrong of us to expect Khuda Haafiz to be an action film, as it is more of a dramatic thriller with a couple of action scenes. It gives Vidyut fans a change in scenario and see how he tests in newer waters. An idea, shared by Vidyut's last release Yaara, that isn't bad, only if it was supported by a more engaging content.

Khuda Haafiz allows the actor in Vidyut to shine more than the martial arts artist in him, and I really liked what I saw there. Vidyut is very impressive in the dramatic scenes, and it is his performance that help us get through most of the weaker portions of the movie. Watch him express his grief in the Indian Embassy scene in Noman, and later when he breaks down after coming across a grisly discovery. That's some really good acting there.

Shivaleeka Oberoi is pretty, but gets very little scope to perform. Among the supporting cast, Annu Kapoor impresses. The performances of Shiv Panditt and Aahana Kumra, playing Nomani police officers, are let down by their distractingly heavy-accented Hindi. Wouldn't it have been better to hire local artistes there to play these roles, rather than take familiar faces and give them thick accents?

- The Look and The Understatedness

Khuda Haafiz runs on a formulaic template that is made better only by its leading man, Vidyut Jammwal's restrained performance. Makes for a decent one-time watch just to see the more dramatic side of the actor. Khuda Haafiz is streaming on Disney+ Hotstar.

(The above story first appeared on LatestLY on Aug 14, 2020 07:30 PM IST. For more news and updates on politics, world, sports, entertainment and lifestyle, log on to our website latestly.com).