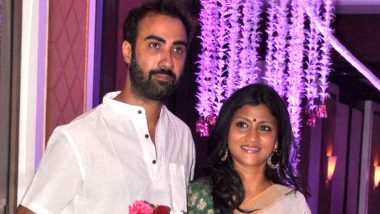 Bollywood actors Konkona Sen Sharma and Ranvir Shorey had tied the knot in September 2010 in a private ceremony and in March 2011, the couple was blessed with their first child, a son. Five years later, in September 2015, Konkona and Ranvir announced about their separation and have been living separately since then. Konkona and Ranvir had filed for divorce that was granted on August 13, 2020, reports ETimes. The report also states that they will share joint custody of their son, Haroon. Ranvir Shorey and Konkona Sen Go Separate Ways Amicably, Couple Files For Divorce.

The report also cites that Konkona Sen Sharma and Ranvir Shorey’s divorce was about to happen a month or two ago, but owing to certain reasons, there was a delay. A source revealed to the portal, “They came and left separately but nevertheless, this is one of the most peaceful divorces that one has seen in a long time. There is absolutely no animosity between the two. Sad of course that they couldn’t reconcile as a couple but who can control destiny?”

Amruta Sathe Pathak, the lawyer who represented Konkona Sen Sharma also confirmed to the portal that Ranvir and her client’s divorce were done ‘amicably’. With mutual consent both the parties had filed for a divorce earlier this year. Before tying the knot, Ranvir and Konkona dated each other for about three years. Traffic Signal, Mixed Doubles and Aaja Nachle are some of the films in which they had worked together.

(The above story first appeared on LatestLY on Aug 14, 2020 12:24 PM IST. For more news and updates on politics, world, sports, entertainment and lifestyle, log on to our website latestly.com).