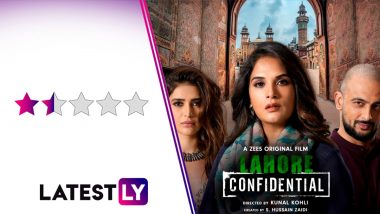 Lahore Confidential Movie Review: In Kunal Kohli's spy thriller based on popular author S Hussain Zaidi's story, Lahore Confidential sees Ananya (Richa Chadha), a demure desk agent for RAW being sent to Pakistan for a secret spy mission. Placed in the Indian High Commission there, she is tasked with getting close to Rauf Ahmed Kazmi (Arunoday Singh), a handsome, high-profile event manager who is an alleged ISI agent. However, over their shared love for Urdu and growing passion, Ananya finds herself conflicted over a man she believes is misunderstood and her duty to the nation. Lahore Confidential: Kunal Kohli Opens Up on How He Created Lahore in Lucknow for Richa Chadha, Arunoday Singh Film.

The second in the spy thriller series by Zee5, Lahore Confidential shares not just the genre of its predecessor - London Confidential - but also its short runtime. At merely a hour and eight minutes in runtime, we expect the film to be crisp, focused and distraction-free. Which it, strangely, isn't much...

Lahore Confidential is both a love story and spy thriller, and it does little justice to both. Thanks to its (comparatively) brief runtime, both the plotlines feel rushed, the romance is very much-underdeveloped and the characters suffering the brunt of it. The spy thriller plotline feels better in comparison - we are at least deceived into thinking that Lahore Confidential is going in a direction hitherto never attempted in Hindi cinema. Only for us to realise that won't work at all (especially in the current milieu), and then we sit back and see the twists and turns of the final act falling in predictable pattern. London Confidential Movie Review: Not Chinese Virus, A Contrived Script is The Enemy in Mouni Roy, Purab Kohli’s Zee5 Spy Thriller.

Lahore Confidential falters primarily in its treatment of its protagonist, whose fallacies feel so silly that we wonder how she even got a posting in RAW. Even when Ananya redeems herself, it feels more like a person coming out of an ugly lover's tiff. Lahore Confidential also reduces female secret agents to merely being a little more than honeypots, something at least London Confidential doesn't do, thankfully.

Richa Chadha's dispassionate performance does no good to improve the character in any way. On the other hand, the charismatic Arunoday Singh and a feisty Karishma Tanna, playing Ananya's spunky RAW colleague, fare better.

- The Spy Plotlines Has Some Moments

Lahore Confidential is another boring entry in Zaidi's spy thriller series. let down by its confused treatment and predictable turns. The movie is streaming on Zee5.

(The above story first appeared on LatestLY on Feb 04, 2021 03:01 PM IST. For more news and updates on politics, world, sports, entertainment and lifestyle, log on to our website latestly.com).