Madhubala 86th Birth Anniversary: James Burke Clicked the Mughal-E-Aazam Actress For Hollywood Magazine LIFE and Gave Us The Most Beautiful Pictures Ever! 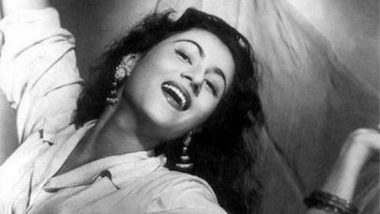 It is the Venus of Indian Cinema, Madhubala's 86th birth anniversary today. Her mere presence on the silver screen was like a huge, huge visual treat for the fans. Born as Mumtaz Jehan Begum Dehlavi on February 14, 1933, the yesteryear diva was known for her flawless beauty and acting prowess. Her films like Mughal-E-Azam, Chalti Ka Naam Gaadi, Mahal, Mr & Mrs 55, Barsaat Ki Raat, Kala Pani, Half Ticket, Sang Dil to name a few are like the masterpieces of the Bollywood film diaries. However, her popularity was not just limited to India but also went abroad. Hollywood's LIFE magazine captured the essence of her life in 1951 and the pictures clicked by ace photographer James Burke can be described as pure magic! Madhubala 86th Birthday Google Doodle: Search Giant Remembers 'Mughal-E-Azam' Actress on Valentine's Day 2019.

The actress with all the charm and grace in life, was a fine example of "The Beauty with Tragedy." It was a known fact that the most beautiful Indian actress of that era herself had a tragic love story and the fans cannot get over it till date. However, these pictures in LIFE, which described her as 'the biggest star” tells you an entirely different story of her. It's the innocence, the grace and the contagious smile makes us think, again and again, that why was destiny so harsh to her. Check out the beautiful stills captured of the Bollywood beauty. 5 Songs of the Iconic Star Which Will Be Cherished for Generations.

We Can't Thank James Enough For these Mesmerizing Snaps

From the archives of Life Magazine - a candid Madhubala in her apartment photographed by James Burke pic.twitter.com/kvfwOHq6I3

Well, these snaps are something that is to stay for the generations to come and they should. After all, in the age of filters and Photoshop, one has to reserve the example of originality in some form. And, what could be better than these photos of the sparkling star? We are not to get another Madhubala ever and honestly no one could even be closer to that. Happy Birthday, Madhubala!

(The above story first appeared on LatestLY on Feb 14, 2019 10:23 AM IST. For more news and updates on politics, world, sports, entertainment and lifestyle, log on to our website latestly.com).