Koka Kola is the upcoming horror comedy starring Mandana Karimi. The shooting of the film went on floors in June last year and on the night before Diwali this year, which was also Mandana’s last day of shoot, things turned ugly on the sets of the film. 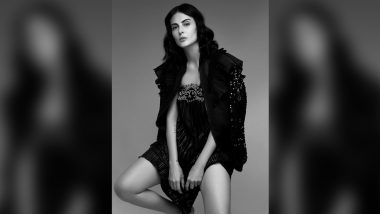 Koka Kola is the upcoming horror comedy starring Mandana Karimi, Sunny Leone and directed by Prasad Tatikeni. The shooting of the film went on floors in June last year and on the night before Diwali this year, which was also Mandana’s last day of shoot, things turned ugly on the sets of the film. In an interview with a leading daily, the actress shared how Mahendra Dhariwal misbehaved with her, but on the other hand, the film’s producer accused the actress of unprofessional behaviour. Mandana Karimi Says Intimate Scenes Onscreen Will Be Challenging for Actors in the Time of COVID-19.

Mandana Karimi told BT that how she has been working on this project for over a year now, alleged that the team was unprofessional and how she continued to work despite facing issues and how this incident has left her shocked. She was quoted as saying, “From the beginning, I had problems with this crew. The producer (Mahendra Dhariwal) is an old-school man who turns the set into a man-dominated, egoistic place. There are places where projects are driven by one person’s ego. That’s not new, but what happened on November 13 has shaken me up. It was the last day of my shoot and I wanted to wrap up and get going. I had another meeting lined up. On the last two days of the shoot, I had come in early and clocked in the hours, though the shoot wasn’t all about me.”

Mandana Karimi further stated, “A little before wrap-up, the producer asked me for an hour more on the set, which I told him I can’t do as I have a meeting lined up. He said okay, and I went back on set to finish my last few takes. We were shooting for a song. But the moment I left the set and went to my vanity van to change, he forcefully came inside and started shouting, ‘You can’t leave. I asked you to do an extra hour and you have to listen because I am the producer and I have paid you.’ This set had no director or assistants. There was a choreographer, a stylist and the producer was calling the shots, literally. It’s the strangest job I have done in my nine years in India. He started creating a scene on the set along with his son and calling me names. It’s unsettling how they have behaved with me as an artiste and as a woman.”

Mandana Karimi says that she’s managing to make a living on her own and says, “A lot happens on a set, but this was absolute misbehavior. People have called me and asked me who this shady guy is and why I am working with him. I have to support myself, there is no one else to help me with that. The last few months have been really tough. This behaviour amounts to mental harassment...” The actress clarified how she had requested for a full payment before she resumed work as the producer was unreliable. Mandana Karimi Reveals How She Was Without Work for Two Years and Then ‘The Casino’ Happened.

Producer Mahendra Dhariwal accused Mandana Karimi of unprofessional behaviour. “In one-and-a-half years, for a contract of Rs 7 lakhs (the amount that Mandana had signed), she has taken Rs 17 lakhs, cash transactions included. I am okay with spending the money, but she has behaved unprofessionally with us,” he revealed. Mahendra stated how the actress demanded money and pushed shooting days citing she is busy. The producer also revealed that he lost his cool when Mandana had started acting up on the sets of the film.

(The above story first appeared on LatestLY on Nov 22, 2020 11:49 AM IST. For more news and updates on politics, world, sports, entertainment and lifestyle, log on to our website latestly.com).