Today, Manisha Koirala has graduated to character-driven roles like playing Nargis in Sanju. While the latter fell short of doing any justice to her talent, we decided to tell you about a few movies that did. 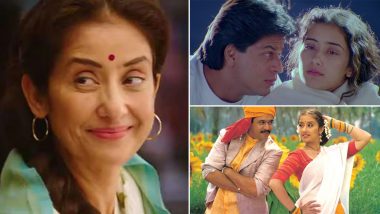 Manisha Koirala was the queen of the 90s. Every other movie had the beautiful actress romancing the hero and the camera. She was often called one of the prettiest actresses in the industry. At a time when actresses were just included in the movie as hero's love interests, Manisha had done certain movies which proved to everyone that she is an actress of calibre. Be it Bombay or Dil Se or 1942: A Love Story, Koirala's flair was unmatchable. Today, she has graduated to character-driven roles like playing Nargis in Sanju. While the latter fell short of doing any justice to her talent, we decided to tell you about a few movies that did. They are now one of the highest-ranked movies of her career on IMDb. Manisha Koirala Birthday: 5 Best Songs Picturised On This Beauty Of Indian Cinema!

It might come as a surprise to some to see Mudhalvan on top of the list as this film had released in 1999. The Tamil original of Anil Kapoor's Nayak, a TV favourite, movie had Manisha playing the role essayed by Rani Mukerji in the Hindi remake.

Bombay received more votes on the movie rating website than Mudhalvan but it ranks second on the list. The second film in Mani Ratnam's trilogy on terrorism, Bombay is about riots that tear apart two communities. Manisha played a Muslim woman married to a Hindu man and has two kids. She perfectly demonstrated the coyness of a village girl and then the helplessness of being caught in a riot.

A popular Kamal Haasan film that had him in dual roles, Manisha played an animal rights activist who fights tooth and nail for hero's affection. Yes, quite an insipid role but Manisha gave her best.

This was the time when RGV's movies still made sense. Manisha played Saroja, Malik's girl and did it so well that you won't be able to take your eyes off her. Whenever she was on screen, she would overshadow everyone with her presence.

Sanju, a biopic on Sanjay Dutt, had Ranbir Kapoor playing the titular role while Manisha played his mother, Nargis Dutt. She looked vividly similar to Nargis and that elevated the cameo to a different level. Add to it her superb performance.

Mani Ratnam's third film in the terrorism trilogy Dil Se had Manisha playing a suicide bomber. For a 90s film, that was a humungous shift in thought-process because, in that era, actresses only played coy roles. Koirala was fantastic in the role. Manisha Koirala Supports Nepal’s Decision to Release New Map Amid Border Disputes With India, Leaves Her Indian Fans Disappointed (View Tweets)

This is probably Manisha Koirala's best performance till date. Playing the daughter of deaf and mute parents may not have been so easy because she had to not just deliver her dialogues but also use sign language. Khamoshi is a gem!

Khamoshi: The Musical is our favourite Manisha Koirala film ever but we would like to know from you which among these movies is your favourite?

(The above story first appeared on LatestLY on Aug 16, 2021 08:10 AM IST. For more news and updates on politics, world, sports, entertainment and lifestyle, log on to our website latestly.com).