As Manoj Kumar celebrates his birthday on July 24, we thought of going down memory lane and list some of his popular songs that are iconic. So, here are the top five melodies featuring the pride of Indian cinema that’ll make you nostalgic. Listen and watch! 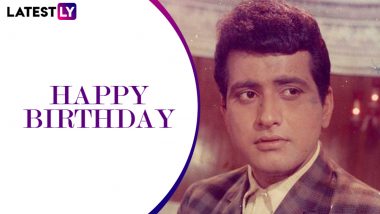 Manoj Kumar is one of the most talented actors we have in Indian cinema. While some artists are known for their style, some for their versatility, he was known for his choice of films during his reign. He has been given the nickname 'Bharat Kumar' by his fans because of picking films with a patriotic theme. Not just a supreme actor, he has also directed a few films. FYI, the legendary actor has also been honoured with Padma Shri and Dadasaheb Phalke Award. In his career spanning decades, he has given hits like Himalaya Ki God Mein, Roti Kapda Aur Makaan, Neel Kamal, Kranti, and many more. 10 Dilip Kumar Films That Defined an Era of Stellar Performances in Bollywood.

And as the superstar celebrates his 84th birthday today (July 24), we thought of going down memory lane and list some of his popular songs that are iconic. So, below are the top five melodies featuring the pride of Indian cinema that’ll make you nostalgic. Check it out. Arjun Kapoor Birthday Special: 5 Best Films of the Bollywood Actor As Per IMDb and Where To Watch Them Online!

Starting Manoj Kumar and Zeenat Aman, this light-hearted song from the film Roti Kapda Aur Makaan was an instant hit during its time. It’s sung by Lata Mangeshkar and Mukesh. Listen and watch!

From the movie, Purab Aur Paschim, this track is for every Hindustani out there. The song features the veteran actor along with Saira Banu. The beautiful lyrics of this one will make you feel sentimental for sure.

Lata Mangeshkar has sung this soulful track and the presence of Nanda and Manoj Kumar adds to its beauty. One of the greatest hits of all time. Watch here.

A romantic number from the black and white era, this track is also very famous among moviegoers. The song is from the film Woh Kaun Thi? and sees Sadhana and Manoj Kumar.

We told you Manoj Kumar was known for choosing movies with patriotic flavour to them and this song echoes the same. From the film Upkar, this melody is still favourite and played during Independence and Republic day. Jai Hind!

That’s it, guys! These are some of the best songs of the acting maestro Manoj Kumar. He might not be seen in films anymore, but there are many aspiring actors who are learning from his works each and every day. Happy birthday, Manoj Kumar!

(The above story first appeared on LatestLY on Jul 24, 2021 08:11 AM IST. For more news and updates on politics, world, sports, entertainment and lifestyle, log on to our website latestly.com).