As India woke up to the news of legendary actor Dilip Kumar passing away on Wednesday, an entire era in Bollywood came to a sudden end. In a career span of nearly six decades, the star gave several unforgettable movies and moments that have been forever etched in the minds of the audiences. 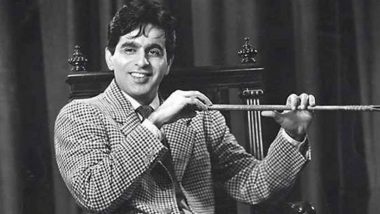 As India woke up to the news of legendary actor Dilip Kumar passing away on Wednesday, an entire era in Bollywood came to a sudden end. In a career span of nearly six decades, the star gave several unforgettable movies and moments that have been forever etched in the minds of the audiences. A philanthropist and former politician, Dilip Kumar has given us legendary films, that will be remembered both for his stellar performances as well as the genre-defying narratives. Dilip Kumar No More! Pakistani Actors Imran Abbas, Saba Qamar, Adnan Siddiqui Mourn The Loss Of The Legend Of Indian Cinema.

Known as the 'Tragedy King' and the 'First Khan', he will always be credited for bringing realism into Hindi cinema. His smoldering intensity, and delivery filled with deep pauses, along with his ability to inhabit the characters was a joy to watch for audiences. At a time when acting was highly melodramatic, Dilip Kumar underplayed as opposed to other stars who overplayed. Be it 'Mughal-e-Azam' (1960), where Dilip Kumar as Salim gave audiences perhaps Hindi cinema's greatest performances, or 'Ram Aur Shyam' (1967), where he played a double role and floored everyone with his impeccable comic timing. Dilip Kumar Funeral: Shah Rukh Khan, Ranbir Kapoor, Karan Johar, Anil Kapoor Visit Late Actor’s House Before His Last Rites (See Pics).

The list is endless, but we will try to remember the legend through his most iconic movies.

The painful saga of love and romance, which was based on Sharat Chandra Chattopadhyay's novel of the same name till date is regarded as one of the finest works of the superstar. The Bimal Roy directorial saw Dilip Kumar nailing the role of a die-hard lover on the road of destruction at hands of love and alcoholism. Kumar's performance as the drunkard who dies without meeting Paro one last time won the hearts of many. His measured portrayal of the lover who drowned his grief in alcohol is still admired.

The ultimate love story of the Mughal prince Salim and a court dancer Anarkali was one of the most tragic films by the legendary superstar. His epic portrayal of the spoiled, self-indulgent and mad-in-love prince won the film several accolades including the National Film Award for Best Feature Film in Hindi in 1961. Dilip Kumar brought a new dimension to the love scenes he enacted with Madhubala who played Anarkali. This iconic piece of cinema was helmed by K Asif and produced by Shapoorji Pallonji.

The musical drama that emerged out as the second highest-grossing film of the year 1950 saw a tragic love triangle between his character the late dazzling diva Nargis and late actor Munawar Sultana. The heartwarming film that saw Kumar in the role of a postmaster hailing from a rich family was directed by director SU Sunny. Although the film seems like a simple love story of a village postmaster Ashok, who wins the hearts of two diametrically opposite women, the film is an exploration of much deeper issues.

The social drama 'Daag,' produced and directed by Amiya Chakravarty, brought Kumar the first ever Filmfare Award in the main category of best actor. The film sees the rise of a poverty-stricken and alcoholic Shankar (Kumar's character) to a wealthy man who again moves towards the path of self-destruction as the family of the love of his life decided to marry her elsewhere. The film, however, ends on a good note with Shankar marrying his love interest and quitting alcohol thereafter.

Directed by BR Chopra, this romantic love triangle about two best friends falling in love with the same woman (Vyjayanthimala) was given a fresh lease in life due to the spectacular performances by the lead pair, led by Dilip Kumar, who sold the movie it with his incredible on-screen charisma. He won his third Filmfare Best Actor Award in a row, for his stellar performance. The film was later even dubbed in Tamil as Pattalyin Sabatham.

One of the noted tragedies made in early Indian cinema 'Deedar' revolves around the unfulfilled love of Dilip Kumar's character who was separated from him due to class inequalities. The film emerged out as one of the most popular films of the golden era and established Kumar as the 'King of tragedies.'

The film starred Nargis and Nimmi alongside Kumar and was based on the book 'A Suitable Boy'. The movie was remade in Tamil as Neengadha Ninaivu.

This Bimal Roy movie, starring Vyjayanthimala and Pran alongside Kumar, is yet another iconic film. Madhumati was the story of reincarnation and eerie haunted mansions, and perhaps for the first time, such tropes, instead of inviting chuckles, made our spines shiver. The movie had a gothic noir feel to it.

Kumar played the double role of brothers Ram and Shyam in the film and gave audiences a glimpse of his comic timing. This was the first time he had essayed a double role, and in the process, gave Hindi cinema a new genre.

Many more double-role films dwelling on the hilarious events that occur when the brothers exchange places, were churned out. From Hema Malini's 'Sita Aur Geeta' to Sridevi's 'Chalbaaz', even Salman Khan's 'Judwa', all tried to follow the template of 'Ram Aur Shyam' and recreated the magic.

It was notable for being the first and only film to feature veteran actors Dilip Kumar and Amitabh Bachchan together on screen. The film is regarded as director Ramesh Sippy's best work and is considered one of the greatest films in the history of cinema. It's regarded as that moment in cinematic history where the past merged with the present and framed our finest actors together for posterity.

In the film, Dilip Kumar played a police officer whose family is killed by the villains, so he hires three convicts (Anil Kapoor, Jackie Shroff and Naseeruddin Shah) to exact his revenge. It was the first time Kumar was paired with Nutan.

The film reunited Subhash Ghai and Kumar after the success of their last film together 'Vidhaata' (1982). Though the actor tried to work in a different genre of movies to do away with the tag of 'The Tragedy King', his epic portrayal in these films has been etched in the hearts of his fans and he will hence, always be remembered with the tag.

Some other tragedy movies by the superstar including 'Tarana', 'Yahudi', and 'Kumati'. He was last seen on the big screen in 'Qila' in 1998 and was honoured with the Dadasaheb Phalke Award in 1994, and the Padma Vibhushan in 2015.