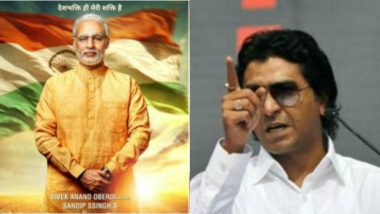 Mumbai, March 25: The MNS on Saturday threatened to stall the release of a biopic on Prime Minister Narendra Modi claiming it violated the model code of conduct for the April-May Lok Sabha polls. 'PM Narendra Modi', directed by Omung Kumar with Vivek Oberoi in the lead, is set for a theatrical release on April 5.

The film also stars Boman Irani, Manoj Joshi, Zarina Wahab and Prashant Narayanan. In a statement, MNS general secretary Shalini Thackeray said party chief Raj Thackeray had last year stated that the BJP was sponsoring movies like 'Toilet-Ek Prem Katha' and 'Padman' to promote its government's schemes. PM Narendra Modi Biopic: Javed Akhtar Is CLUELESS on Being Named As Lyricist in Vivek Oberoi’s Film, Trolls Argue He Is Not the Only ‘Javed Akhtar’ in Industry!

"Not even a year has passed and the BJP has added another feather to its cap," she said, referring to the biopic on the PM.

Stating that it should not be allowed to release, Thackeray also slammed the makers of the movie for giving credit for lyrics to Javed Akhtar and Sameer.

Both the noted Bollywood lyricists have publicly claimed that they have not contributed in any way to the Modi biopic.

"These people want to falsely spread a message that noted people from society and known names from the film industry have contributed to the movie on the life of Prime Minister Narendra Modi. The MNS Chitrapat Karmachari Sena condemns this cheap tactic to promote the film," Thackeray, and Amey Khopkar, the president of Maharashtra Navnirman Chitrapat Karmachari Sena, said in a joint message.

Thackeray and Khopkar said political parties are expected to adhere to the model code of conduct in place for Lok Sabha elections. They further claimed the MNS will stop the release of the film "in its own style".