Naseeruddin Shah Birthday: Five Villainous Roles Of The Actor That Are Pure Evil

Be it Mr Jindal in Mohra or Inspector DeCosta in Takkar or the Subedar in Mirch Masala, nobody plays evil in such a good way as Naseeruddin Shah. So on his birthday today, we talk about the five villainous roles of the man that are pure evil. 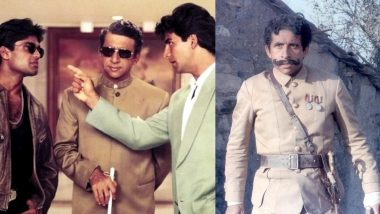 Naseeruddin Shah is one of the finest actors in the Industry. And there's a thing about such actors. They don't make you fall in love with their good portrayals, they force you to hate them when their characters are plain evil. Naseeruddin Shah is one such actor. The amount of conviction he brings to his roles is simply magnificent. Only could have made us feel torn about choosing a side in Sarfarosh and make our screen crawl in Takkar. In fact, even in his outlandish costume in Jackpot, he made it count. So on his birthday, let us tell you about five of our favourite villainous roles played by Shah.   Naseeruddin Shah Birthday Special: Our 10 Fave Performances of the Brilliant Actor That You Should Recap Once Again if You’re Tired of the Current Mediocrity!

Mirch Masala is one of the gems of Bollywood which showed a lot of societal evils and even taught us to fight them. In the midst of all this, Shah played the subedar, a conniving, manipulative and lecherous man. His lustful eyes can make anybody hide.

A perfect chameleon, Shah played the blind Mr Jindal in the first half who manages to fool everyone from Akshay Kumar to Suniel Shetty for his own selfish and devilish gains. Shah was simply perfect as the bad guy!

Creeps in Hindi movies are all over the place. But the way Shah portrayed a uniform man and his creepy ways are simply hateful, to say the least, and that's his biggest triumph. Even the thought of that character is giving us the creeps!

When he turns out to be the mastermind at the end, we have never felt so betrayed. And that's Shah's craft. He made us fall so deeply in love with the Ghazal singing wise friend of Aamir Khan that when we saw his real face, we couldn't believe it or rather didn't want to believe it. Hrithik Roshan Celebrates 15 Years Of Krrish With Krrish 4; Here’s Everything We Know About The Sequel

Naseeruddin Shah played Dr Siddhant Arya in the film who gets traps Rohit, our favourite BFF of an alien. Shah's Arya is absolutely unapologetic about his ways and very suave at that. Only he could have made bad look so cool!

(The above story first appeared on LatestLY on Jul 20, 2021 08:10 AM IST. For more news and updates on politics, world, sports, entertainment and lifestyle, log on to our website latestly.com).