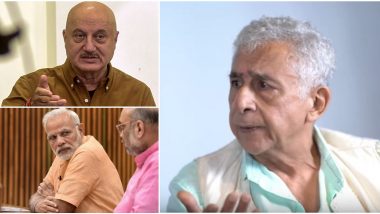 Naseeruddin Shah, the National Award-winning actor, is known for his outspoken attitude and calling spade a spade. That attitude was once again on display in his interview to The Wire, hosted by senior journalist Sidharth Bhatia.

Here are five controversial stands that Naseeruddin Shah took about the current political situation and his Bollywood peers.

On The Fears That CAA-NRC Has Raised

Naseeruddin Shah straightforwardly states that CAA and NRC are brought in to divide the country on a religious basis, and for the first time, he is made conscious of his Muslim identity. He said, "If living 70 years here and doing whatever I could do not prove me to be in India, I don’t know what does. I am not afraid, I am not anxious, I am angry." Delhi Assembly Elections 2020: Akali Dal Not to Contest Polls Amid Widening Differences With BJP Over CAA-NRC.

He went on to add, "There is a video clip of him saying, before he became prime minister, that he has never studied. Which is considered a charming and candid statement at that time but in the light of all that has happened in the last six years, it has acquired eerie proportions. And then, of course, this was before he got his doctorate in political science, which, like Anurag (Kashyap), I would also be very interested in having a look at." Filmmaker Anurag Kashyap Demands to See PM Narendra Modi’s Father’s Birth Certificate.

Here, we like to clarify that the video clip that Naseeruddin Shah is referring to, shown below, is a very truncated clip that doesn't say the whole truth.

In the above clip, it feels like Narendra Modi admits he has studied only till the 10th. However, in the actual video interview given by Modi to journalist Rajeev Shukla (see below), we hear the future PM reveal that he has done his further education (BA & MA) in the years later.

That said, Modi's college education is still a bone of contention, as there is no proper evidence given by either himself or the universities, where he allegedly studied, of his real degrees.

While the anti-CAA protests are raging, many are demanding Bollywood superstars Aamir and Shah Rukh Khan to speak up. But both have maintained a stoic silence. Ajay Devgn and Akshay Kumar have shown to have pro-government leanings, so their silence was expected by the detractors. Speaking about this, Shah said that he understands that their silence comes out of their insecurity, but wonders why they are so insecure after making enough money to last seven generations. Anti-CAA and NRC Protestors Sing Shah Rukh Khan Songs While Questioning his Silence on the Grave Issue (Watch Video).

He spoke, "As far as the established figures are considered, it’s understandable why they don’t speak up. One does wonder how much do they have to lose? Haven’t you made enough to last you seven generations? It’s like this line from Gibran - 'Dread of thirst when your well is full; The thirst that is unquenchable.'"

On Deepika Padukone And Her JNU Support

Deepika Padukone's attendance of a meeting at the Jawaharlal Nehru University (JNU) after the violence that broke there on January 5 met with a lot of outrage from the right-wingers. Naseeruddin Shah, however, has admiration for the actress, and said, "Deepika Padukone has a lot to lose and she did come out in public to show her solidarity." BJP's Gopal Bhargava Takes Dig at Deepika Padukone over JNU Visit, Says Heroines Should Be in Mumbai and Dance.

While speaking about stars who are supporting the government or taking a neutral stand, Shah said it is high time for them to make up their mind. Then he took the example of Anupam Kher, who is known for his pro-BJP stance, and his wife, Kirron Kher is also an MP from the party from Chandigarh.

Mincing no words, Shah called Kher a 'clown' and insisted that the latter should not be taken seriously. Shah then added, "Any number of his contemporaries from NSD (National School of Drama), FTII (Film and Television Institute of India) can attest to his sycophantic nature. It's in his blood. He can't help it."

Watch the whole interview below:

Interestingly, Anupam Kher and Naseeruddin Shah have done quite a few movies together like Pestonjee, A Wednesday, Aiyaary, Lootere, Karma, Tridev, Chaahat, etc.

Shah's interview has become the talk of the town, with celebs like Jaaved Jaaferi, Ali Fazal, Shashank Arora et al praising the veteran actor, while the right-wingers are outraging over it. So which side are you on? Share your thoughts in the comments section below.

(The above story first appeared on LatestLY on Jan 22, 2020 08:35 AM IST. For more news and updates on politics, world, sports, entertainment and lifestyle, log on to our website latestly.com).