Neliima Azeem Birthday: Five Pictures Of The Actress Shared By Shahid Kapoor And Ishaan Khatter That Are Our Favourites

Shahid Kapoor and Ishaan Khatter never leave a chance to capture their mother Neelima Azeem in their cameras. Sometimes candid, sometime vintage, their version for their mother is always sweet and nice. Check out five such pictures here. 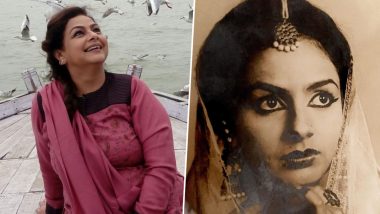 Nellima Azeem is one of the most popular faces from Indian television. Her shows on Doordarshan were highly popular and so were her roles. These days she has reduced her acting assignments and was recently seen in Dolly Kitty Aur Chamakte Sitaare. We did love her in Ishk Vishq as Shahid Kapoor's mother in the film which happens to be his debut movie. It's really incredible to see how she made sure that her sons don't have a disconnect. Shahid and Ishaan Khatter are step-brothers and yet they are more than just blood brothers. The actress is obviously responsible for creating such a harmonious environment for both the boys to bond and become friends. It's such a rare happenings. The boys too lose no chance to talk about their mother on social media. Shahid Kapoor's Mom Neelima Azeem Defends Kabir Singh, Compares it With Heath Ledger's 'Joker'

On her birthday, let us show you a few pictures of Nellima Azeem shared by Shahid and Ishaan because as they say, beauty lies in the eyes of the beholder. Ishaan Khatter Gets Yelled At By His Mother Neliima Azeem; Shahid Kapoor And Mira Kapoor Have Fun At His Expense (Watch Video)

Maa - the whole world in one word

While Shahid keeps it sweet and polite, Ishaan brings his quirky game with his captions

Mother - the best human in the world

It's really sweet to see how Shahid and Ishaan make it a point to be with Nellima Azeem and cherish her always. We love to watch such bond.

(The above story first appeared on LatestLY on Dec 02, 2021 08:20 AM IST. For more news and updates on politics, world, sports, entertainment and lifestyle, log on to our website latestly.com).