Shahid Kapoor and Kiara Advani's Kabir Singh is being loved and bashed at the same time. Sandeep Vanga directed film is the rehash of his own Telugu film Arjun Reddy that starred Vijay Deverakonda. While taking sides, Shahid's mother Neelima recently ended up comparing Kabir Singh with the iconic character of 'Joker' from The Dark Night. 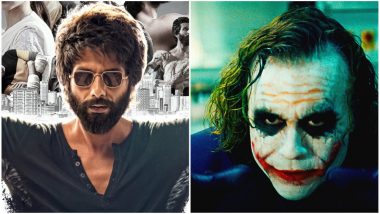 Shahid Kapoor in and as Kabir Singh, Heath Ledger as Joker in The Dark Knight. (Photo Credits: File images)

Kabir Singh is soaring high at the box office windows. The Shahid Kapoor-Kiara Advani received mixed but huge response from the audience. The audience is busy debating on the plot of the story and Shahid's aggressive character and it's morality. Recently, when Shahid's mother Neelima Azeem was asked about the whole scene, she defended her son. In fact, she ended up comparing Kabir Singh with Heath Ledger's Joker from The Dark Night. Kabir Singh: 10 Shocking Things Shahid Kapoor's Character Does That Will Scar You With Its Toxic Masculinity (SPOILER ALERT).

She explained to mid-day, "Actors have the freedom to play morally controversial characters because they make for meaty roles. Tomorrow, if you play a psychopathic serial killer, will everybody watching the movie become one? Dilip [Kumar] Saab and Rajesh Khanna played grey roles in Amar and Red Rose. Are you suggesting that every grey role be scrapped? In Hollywood, actors have won Oscars for characters like these. If we can't make such movies, then we will have to scrap films like Marlon Brando's A Streetcar Named Desire, Godfather and Heath Ledger's Joker [The Dark Knight]. One needs to understand that it is a story and not a lecture on morality."

She further also said that Kabir Singh is not getting glorified but gets suffers due to his behaviour. Well, we wonder whether the fans will agree with her point of view, but then again, interpreting movies is subjective.

Recently, even his step-brother, Dhadak actor Ishaan Khatter lauded Shahid's performance in the film. He also defended his character saying that it is about playing a character and that his bro has nailed every bit of it. The debate will surely continue until the film is running successfully in the theatres. What is your take on  Sandeep Vanga directed Kabir Singh or its original Telugu film, Vijay Deverakonda starrer Arjun Reddy?

(The above story first appeared on LatestLY on Jun 28, 2019 10:04 AM IST. For more news and updates on politics, world, sports, entertainment and lifestyle, log on to our website latestly.com).