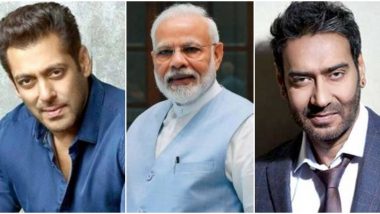 On Prime Minister Narendra Modi's 70th birthday, several prominent personalities from across different fields such as sports and entertainment took to social media to share warm birthday messages. While Kangana Ranaut and Anupam Kher posted videos with birthday messages for PM Modi on Twitter, other celebs such as Anil Kapoor, Shilpa Shetty among others shared pictures with the PM as they wished him. Actor Salman Khan too took to Twitter to wish the Prime Minister as he shared an old picture of himself in conversation with Mr Modi. PM Narendra Modi Turns 70: From Anil Kapoor to Abhishek Bachchan, Bollywood Celebs Extend Birthday Wishes for Prime Minister of India.

The actor taking to Twitter wrote, "Wishing the honourable prime minister Mr. Narendra Modi, a very happy birthday n many more to come @narendramodi. In the picture shared by Salman, the duo seem to be in a deep conversation with each other as it seems the Prime Minister is explaining something to the Bollywood actor. Just like Salman, several other Bollywood personalities sent messages to the PM with some heartfelt wishes such as Ajay Devgn who kept his message short as he said, "Happy 70th Modiji. More power to you sir."PM Narendra Modi 70th Birthday: Sachin Tendulkar, Virat Kohli, Suresh Raina Lead Cricket Fraternity in Wishing the Indian Prime Minister.

More Power to you Sir.@narendramodi#HappyBirthdayPMModi

Among other important personalities, Indian cricket captain Virat Kohli wrote on Twitter, "Wishing a very Happy Birthday to our honorable Prime Minister Shri Narendra Modi ji." Also actor Aamir Khan shared a message saying, "on PM @narendramodi ji namaskar. Wishing you many happy returns of the day. May good health and happiness always be with you. With Respect and Regards." The Prime Minister of India also received birthday wishes from other world leaders as he turned a year older.

(The above story first appeared on LatestLY on Sep 17, 2020 04:30 PM IST. For more news and updates on politics, world, sports, entertainment and lifestyle, log on to our website latestly.com).