Preity Zinta Birthday: Before Dil Se, Here’s How the Dimpled Beauty Won the Nation’s Hearts With These Ads (Watch Videos)

As the ever pretty, Preity Zinta celebrates her birthday today (January 31), we take a look at her two popular commercials that will make you nostalgic and how. Check it out! 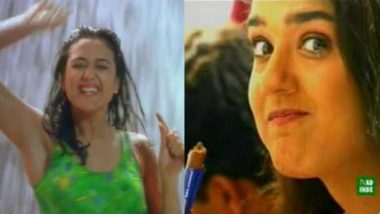 What comes to your mind first when we say, Preity Zinta? Bubbly, dimpled beauty, cute, right? In fact, during her time in showbiz, while her contemporaries were all about grace, elegance, and poise, she stood out from the rest, thanks to her spunky personality. Not just this, in her career spanning over a decade, she pushed the envelope and chose unconventional roles. Be it Kya Kehna, Sangharsh to Veer Zaara, she is definitely was the risk-taker from the 90s. Preity Zinta and Gene Goodenough Are Proud Parents to Twins, Name Their Babies Jai and Gia!

However, before making it big in the entertainment world with Shah Rukh Khan-starrer Dil Se, Preity starred precisely in two ads that were instant hits. Although fans know her as the waterfall Liril girl, the actress’ first commercial happens to be the Perk ad. Yes, you read that right! And as she celebrates her birthday today (January 31), let’s revisit these ads featuring PZ.

This was the birthday girl’s very first ad in 1996. In the clip, we see the beauty at her charming best flaunting her dimple. Reportedly, the actress for chosen for the ad after accidentally meeting with the director at a friend’s birthday party. Mommy Preity Zinta Is Watching Abhishek Bachchan’s Bob Biswas With Her Adorable Twins, Shares Pic On Instagram.

During the 90s featuring in the Liril ad was a big achievement of sorts. And in 1997, Preity starred in the Liril commercial wherein she danced her heart out amidst a waterfall. This ad also benefited her as she caught Mani Ratnam’s attention and that's how she was roped in for Dil Se.

So, those were the two ads that Preity Zinta starred in before entering Bollywood. Recently, she was in the news for being a mother of twins with husband Gene Goodenough. Here’s wishing the ever-gorgeous diva a very happy birthday.

(The above story first appeared on LatestLY on Jan 31, 2022 08:10 AM IST. For more news and updates on politics, world, sports, entertainment and lifestyle, log on to our website latestly.com).