Fresh pictures of Nick and Priyanka from their Amsterdam tour have now surfaced online and it sure looks like the couple are having a great time. 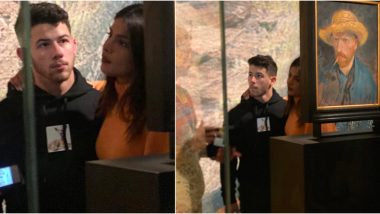 Priyanka Chopra Jonas recently gave us a glimpse of where the actress is in her recent picture and it's none other than the amazing Amsterdam. Priyanka is accompanying Nick in the gorgeous Netherlands’capital. There's no doubt that every time Nick and PeeCe step out, we can't help but marvel at their pictures thanks to their amazing style and just how adorable they look together. While Amsterdam is known for its artistic heritage, it looks like Priyanka and Nick are soaking themselves in this very cultural vibe of the city. Nick Jonas' Comment About Holding 'Adult Themed' Projects Back is in Contrast With Priyanka Chopra's Biopic on Ma Anand Sheela.

Fresh pictures of Nick and Priyanka from their Amsterdam tour have now surfaced online and it sure looks like the couple are having a great time. A few pictures that have been shared by the fan clubs of the duo feature Nick and Pri enjoying a tour at Van Gogh museum in Amsterdam. Another picture of the couple shows them taking a walk in some amazing winter wear. Check out pictures of Nick and Priyanka from Amsterdam below. Priyanka Chopra's Biopic on Ma Anand Sheela is Happening and the Actress will Co-Produce it with Amazon Studios.

Here's Another Picture of Priyanka Chopra and Nick Jonas in Amsterdam:

On the work front, we recently learnt that the Maa Anand Sheela biopic starring Priyanka Chopra Jonas is happening and if reports are to go by, the biopic has found its producer in Amazon Studios. Apart from this, PeeCe does have her plate full with the Mindy Kaling project, Russo Brother's next, Citadel with Richard Madden and The White Tiger with Rajkumar Rao.

(The above story first appeared on LatestLY on Feb 21, 2020 09:06 PM IST. For more news and updates on politics, world, sports, entertainment and lifestyle, log on to our website latestly.com).