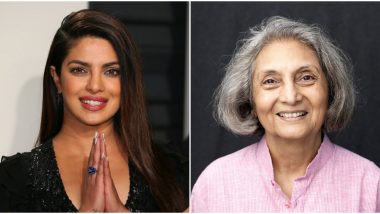 It doesn't matter if Ma Anand Sheela wants Priyanka Chopra to play her part in the biopic on her life for PeeCee is going ahead with her venture no matter what. The actress had earlier confessed on The Ellen DeGeneres Show of making a movie on the convicted bioterrorist and if a report in Hollywood Reporter is to believe, the biopic has found its producer in Amazon Studios. Ma Anand Sheela was a controversial figure back in 1984 who was accused of arson, wiretapping, attempted murder, and mass poisonings. She was sentenced to 20 years in federal prison but got out on parole after 39 months.  Karan Johar Describes Osho Secretary Ma Anand Sheela ‘Fun Forthright and Fabulous’, Shares a Selfie Post-Interview.

The concept of a biopic on Ma Anand Sheela was highlighted by PeeCee's team after the success of Netflix's Wild Wild Country. Sheela was the personal secretary of Bhagwan Shree Rajneesh from 1981 through 1985 who supervised his move to relocate his thousands of followers to the small town of Wasco County, Oregon. Rain Man director Barry Levinson will helm this big project starring Priyanka and he'll also co-produce it with Permut Presentations’ David Permut, Jason Sosnoff, and Priyanka Chopra's Purple Pebble banner.  Nick Jonas' Comment About Holding 'Adult Themed' Projects Back is in Contrast With Priyanka Chopra's Biopic on Ma Anand Sheela.

Earlier when Ma Anand Sheela was asked about the biopic on her life starring Priyanka Chopra, she had revealed that she has sent a legal notice to the actress and her team. "I told her I do not give her permission to do the film because I have not chosen her... In Switzerland, we send legal notices very simply. I sent her an email which is accepted there as legal," she said. She further picked Alia Bhatt as her choice instead. "I saw bits of a film that my sister was watching, and I thought, I looked like her when I was young. I asked my sister, ‘Did I look like her when I was young? Do you remember’? And she said, ‘Yes, you do’. I feel she has the spunk in her that I had. Spunk is very necessary and it is very natural, it is not artificial, not cosmetic, it is genuine," she said while praising Alia and picking her as her choice for the biopic.

Seems like Priyanka was able to convince Sheela. The actress is also looking forward to starring in Matrix 4 with Keanu Reeves and later in We Can Be Heroes where she supposedly plays a villain. She also has her project with Mindy Kaling, the idea of which revolves around Indian weddings, Russo Brother's next, Citadel with Richard Madden and The White Tiger with Rajkumar Rao.

(The above story first appeared on LatestLY on Feb 21, 2020 09:01 AM IST. For more news and updates on politics, world, sports, entertainment and lifestyle, log on to our website latestly.com).