Netflix's two personal favourites, Nawazuddin Siddiqui and Radhika Apte and collaborating after Sacred Games for this new venture and it sure seems like a worthy watch. 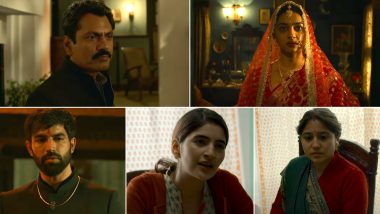 Among the 17 new originals announced by Netflix on July 16, there was Nawazuddin Siddiqui and Radhika Apte's Raat Akeli Hai. While little was known about the movie's premise then, its newly released trailer further highlights its twisted narrative and offers you a glimpse into what you can expect from this murder mystery. Netflix's two personal favourites, Nawazuddin and Apte and collaborating after Sacred Games for this new venture and it sure seems like a worthy watch. Netflix India Announces 17 'Hindi' Originals, Fans Ask 'Where Is Regional Content? (Read Tweets).

Nawazuddin plays a police officer who's investigating a newly married landlord's murder. Radhika plays the landlord's wife who's suspected of his murder along with the rest of his family members. We won't deny, the premise does remind us of Daniel Craig and Chris Evan's Knives Out which released in 2019 and revolved around the death of a rich crime novelist and the investigation that follows later on. Here Nawazuddin has carefully stepped into Craig's shoes and looks determined to unravel the mystery. But leaving aside the basic plot details, nothing else looks similar between these two projects. The treatment is different and so is the conflicted relationships that are shown within them. Did Netflix Buy Ludo and Dolly Kitty Aur Woh Chamakte Sitare for THIS Whopping Amount?

Raat Akeli Hai's trailer is intriguing enough, especially for the ones who are obsessed with the mystery genre. It looks engrossing and worthy of your time. Netflix India Announces 17 Original Projects Including Janhvi Kapoor's 'The Kargil Girl', Sanjay Dutt's 'Torbaaz' And It's Time To Store Some Popcorn at Home! (Watch Video).

(The above story first appeared on LatestLY on Jul 17, 2020 11:24 AM IST. For more news and updates on politics, world, sports, entertainment and lifestyle, log on to our website latestly.com).