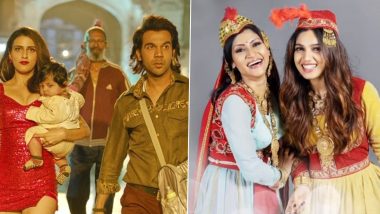 Netflix made headlines when it announced as many as 17 new releases for its Indian audiences. The announcement which included movies like Janhvi Kapoor's Gunjan Saxena, Abhishek Bachchan's multi-starrer Ludo and Bhumi Pednekar, Konkona Sen Sharma's Dolly Kitty Aur Woh Chamakte Sitare also included their own originals like Bobby Deol's Class of '83 and Masaba Gupta's show, Masaba Masaba. The OTT giant is rumoured to have shelled a big amount in acquiring the direct-to-web releases of this big project and if sources are to believe, they have spent Rs 40 and 50 crore on two of its most-promising projects alone. Netflix India Announces 17 Original Projects Including Janhvi Kapoor's 'The Kargil Girl', Sanjay Dutt's 'Torbaaz' And It's Time To Store Some Popcorn at Home! (Watch Video).

A trade insider in his interaction with Mid-Day said, "Dolly Kitty... fetched its makers a cool Rs 40 crore approximately whereas the makers of Ludo starring Abhishek Bachchan and Rajkummar Rao, among others sealed the deal at over Rs 50 crore. The films' music and TV rights have been negotiated over and above that." When asked if the OTT platform was apprehensive about spending such big amounts, the same source said, "The top brass at Netflix felt the asking price was justified as Ludo is one of the most awaited releases of the year. Similarly, Alankrita Shrivastava's film received glowing reviews at the Busan International Film Festival and will grab eyeballs around the globe." Anil Kapoor - Anurag Kashyap's AK vs AK To Release on Netflix: Did You the Know, the Project was Originally Planned with Shahid Kapoor as AK vs SK?

Are you excited or ARE YOU EXCITED?!

Of course, the makers won't reveal the actual numbers but the insider insists the bracket is somewhere between Rs 40-50 crore for these releases. However regional fans of Netflix are disappointed with their announcement as it doesn't have a single regional release, unlike Amazon Prime which had quite a few.

(The above story first appeared on LatestLY on Jul 16, 2020 02:40 PM IST. For more news and updates on politics, world, sports, entertainment and lifestyle, log on to our website latestly.com).