Republic Day is the time to celebrate our freedom fighter, fill our hearts with gratitude for their sacrifices and movies do a fine job of evoking that sentiment in us. So let's talk about the biopics on these brave men that we have watched a number of times. 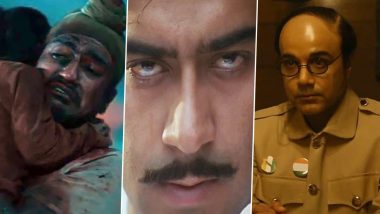 Republic Day 2022 is here. We don't often remember our freedom fighters who laid their lives for us. Every bit of freedom that we enjoy today is because they were selfless and wanted to free their nation. We often belittle them. Republic Day and Independence Day are perhaps the only two days where we stop before making any unsavoury comments about such fearless men and women. It's the day to celebrate them, fill our hearts with gratitude for them and movies do a fine job of evoking that sentiment in us. So let's talk about the biopics on these brave men that we have watched number of times. Sardar Udham: Here’s Why Vicky Kaushal’s Film Was Rejected As India's Official Entry for Oscars 2022.

Jallinwala Bagh massacre was one of the most heinous crimes The British Empire had every committed. This Vicky Kaushal starrer doesn't just ride with Udham on his journey of 20+ years to assassinate General Dyer who had orchestrated the mass killing but also the vivid scenes of death and destruction at Jalinwala Bagh.

This film is absolute masterpiece

The Legend of Bhagat Singh

Bhagat Singh is one of those fighters who still finds devotees and followers in this century. His words, his vision, his daredevilry...Indians just can't get enough of it. Ajay Devgn did a fantastic job of transforming himself into the legendary man.

The Legend of Bhagat Singh (2002) pic.twitter.com/RzYQlsTH0b

#ParakramDiwas: Gumnaami is based on the Mukherjee Commission Hearings where the three theories about #NetajiSubhasChandraBose's death were discussed and debated. The film won Best Feature Film in Bengali & Best Adapted Screenplay at 67th #NationalFilmAwards #AmritMahotsav pic.twitter.com/xhf74oi1hR

The Making Of a Mahatma

Based on Fatima Meer's book The Apprenticeship of a Mahatma, The Making of a Mahatma has Rajit Kapur playing the lead and Shyam Benegal directing him. The movie is about Mohandas Karamchand Gandhi's journey to Mahatma.

The Making of the Mahatma, an NFDC Co-production, the film showcases the early life of Mahatma Gandhi, the film is based on the book ‘Apprenticeship of a Mahatma’ by Fatima Meer.

Streaming For Free on the occasion of #AzadiKaAmritMahotsav on https://t.co/0ru3CgmiAt@PIB_India pic.twitter.com/XiLZaT7X0o

Paresh Rawal played Sardar Vallabhai Patel, a revolutionary who ridiculed the demand for freedom by Indians and also Mahatma Gandhi. But upon meeting the latter, he has a change of heart and becomes an integral part of the freedom movement. The movie directed by Ketan Mehta manages to capture Patel's ideologies and his thought-process perfectly. This is a must for everyone these days.

Biopics today don't have the same class as it did earlier barring Sardar Udham and hence, such stories have become quite rare.

(The above story first appeared on LatestLY on Jan 26, 2022 09:40 AM IST. For more news and updates on politics, world, sports, entertainment and lifestyle, log on to our website latestly.com).