Salman Khan Gives a Nod to Rs 7.5 Crore Climax Scene in Radhe: Your Most Wanted Bhai (Deets Inside)

Salman Khan's Radhe: Your Most Wanted Bhai reportedly has a climax scene wherein the makers have given a nod to spend Rs 7.5 crore on VFX. Read on! 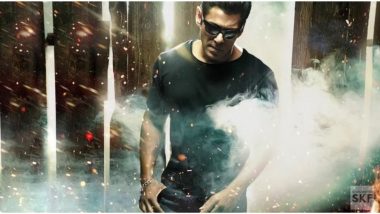 Salman Khan's next Radhe: Your Most Wanted Bhai is one of the highly anticipated films of 2020. Starring Disha Patani opposite the superstar, the flick is helmed by none other than Prabhudeva. The shooting of the same had commenced in November 2019 and fans are waiting with bated breath to get a sneak peek from the same. All that being said, the latest report surrounding the movie is that one particular climax scene in Radhe has cost the makers a whopping Rs 7.5 crore. Yep, that's correct. Radhe: Disha Patani Is Delighted to Work with Salman Khan Yet Again, Says ‘It’s Happening Because of Hard Work and Good Fortune’.

As per a report in Mid-Day, Radhe's VFX will be supreme and on the lines of Baahubali 1 and part 2. Further, the report elaborates that the Bhaijaan has given a green signal to spend Rs 7.50 crore for a 20 minutes long VFX climax scene. Reportedly, the action scene will see Salman and Randeep Hooda and is also one of the most crucial sequence from the movie. Gautam Gulati Bags Salman Khan's Radhe, Here's What The Bigg Boss 8 Winner Will Play in This Prabhudeva Directorial.

"Shooting in chroma key is an expensive process that only big-ticket filmmakers can afford. Baahubali and its sequel were two of the recent films that employed the technology. While the process of shooting a video on a blue or green background hardly burns a hole in the pocket, the lighting required for chroma is expensive. Then comes the VFX part, where the background is removed digitally and replaced with the background of one's choice. The high-octane action piece was filmed in a studio. Now, the VFX team is at work lending it the necessary background. Moreover, the 20-minute sequence, visualised by director Prabhudeva is VFX-laden as the two actors battle it out in a combat scene, " a source told the daily.

"When Prabhudeva and Salman had discussed the scene with the VFX team, they were told that the cost would run into over Rs 7 crore. However, Salman greenlit it as he believes that the climax of the cop caper has the potential to be much-talked-about," the source added further. With this piece of news, we are damn excited to see what's stored in for fans in Radhe. For the unaware, the flick will hit the silverscreen on Eid 2020. Stay tuned to LatestLY!

(The above story first appeared on LatestLY on Jan 28, 2020 09:54 AM IST. For more news and updates on politics, world, sports, entertainment and lifestyle, log on to our website latestly.com).