Salman Khan Shares a Cute Picture With Nephews Ahil, Nirvan and Baby Niece Ayat and We Are All Hearts For It! (View Post)

The actor has also been having a great time with family and his recent Instagram post showed how happy he is being surrounded by loved ones amid this crisis. 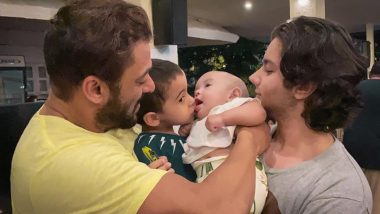 Salman Khan has been spending his coronavirus quarantine at his Panvel farmhouse and we have to say, the actor has had a rather productive time given the amount of work the actor has churned out amid the pandemic. From releasing two music videos of songs sung by him to his recent hobby of getting into farming, Salman seems to be making the most of the time that he has got on his hands. The actor has also been having a great time with family and his recent Instagram post showed how happy he is being surrounded by loved ones amid this crisis. Salman Khan's Radhe: Your Most Wanted Bhai to Skip Diwali Release and Instead Hit the Theatres in 2021?

Salman took to Instagram to share an adorable picture of his nephews, Ahil and Nirvan with baby Ayat. The picture is far too adorable as Salman is seen holding his nephew Ahil and baby Aayat whereas Nirvan is seen opposite to him looking cutely at the two kiddos. Sharing the cute snap, Salman wrote, "Siblings ..." We have already seen Salman posting some of the cutest snaps of baby Ayat before too and this is another amazing one. The actor is known to be extremely close to his niece and nephews and is often seen spending time with them. Salman Khan To Book An Entire Floor Of Mehboob Studios To Complete Radhe Shoot In August (Deets Inside).

Recently, pictures of Salman from his farming escapades went viral. The actor was seen toiling in his field and ploughing the field with a tractor at his Panvel farmhouse. The actor in his post mentioned that he was working on a rice plantation. On the work front, thanks to coronavirus, the actor's upcoming film, Radhe: Your Most Wanted Bhai has been postponed.

(The above story first appeared on LatestLY on Jul 26, 2020 08:21 PM IST. For more news and updates on politics, world, sports, entertainment and lifestyle, log on to our website latestly.com).