After shoots have been granted permission to begin, actor Salman Khan has applied to Mehboob Studios for permission to block off an entire floor of their studio in Bandra to complete shooting for his action flick Radhe by August end. 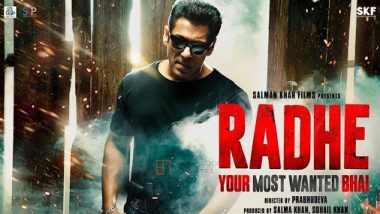 Salman Khan grand Eid 2020 release plans went to hell, thanks to the on-going Coronavirus pandemic in India. Eid, that is generally Salman Khan's dominance every year at the box office, was dull this year as the actor's festive release Radhe: Your Most Wanted Bhai, was pushed back. The film had about two-weeks of work left, which Salman Khan and crew couldn't finish, due to the nationwide lockdown being implemented in March. However, come August, Bollywood will officially open its 'sets' doors and shootings will begin. Salman Khan's Radhe, Ranveer Singh's 83, Akshay Kumar's Laxmmi Bomb: Here's Why These Big-Budget Movies Won't Be Releasing On OTT Platforms Anytime Soon.

Not wanting to waste even a single day's time, Salman Khan, as per a report in Mid-day, has applied to Mehboob Studios for permission to block off an entire floor of their studio in Bandra to complete shooting for his action flick by August end. Radhe: Your Most Wanted Bhai: Salman Khan and Disha Patani's Song Not To be Shot in Azerbaijan Due To Coronavirus Scare?.

A source told the tabloid, “Come August, several films are expected to go on floors. Salman, along with producer Atul Agnihotri and director Prabhudheva, has gone back to the drawing board to devise ways of filming in the post-COVID world without compromising on the movie’s scale. They are reworking the pending portions, including a song, so that they can be shot with a minimal crew. The studio is likely to be booked from the first week of August, with

Salman hoping to call it a wrap by the month-end."

Now that's some quick thinking on Bhai and his team's part. There has also been news that the Prabhudeva-directed Radhe: Your Most Wanted Bhai was all set to release on the digital platform and that Salman's manager was in talks with a leading OTT platform for a lucrative deal. However, those reports were shunned and Radhe will most likely release in theatres only.

(The above story first appeared on LatestLY on Jul 07, 2020 02:08 PM IST. For more news and updates on politics, world, sports, entertainment and lifestyle, log on to our website latestly.com).