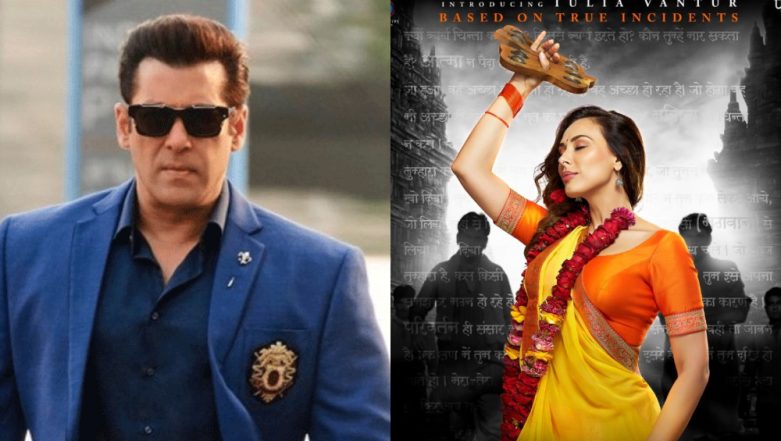 Last night we got the first look at Romanian beauty Iulia Vantur's first film as a Bollywood heroine. The poster of her debut film, Radha Kyon Gori Main Kyon Kaala, was released online. The movie seems to be about naming and shaming rapists, given the hashtag that is being associated with the film. Now, the moment all fans must have been waiting for his here. Salman Khan, who is rumoured to be dating Iulia, has said a few words about her film.

Salman took to his social media pages and shared the first poster of the film. While he specifically did not have anything to say about Iulia and her never-seen-before avatar on the poster, he did wish the entire team of the film collectively. He wrote, "Wishing the team of "Radha Kyon Gori Main Kyon Kaala" all the best and all the success! @IuliaVantur"

Wishing the team of "Radha Kyon Gori Main Kyon Kaala" all the best and all the success! @IuliaVantur pic.twitter.com/FyXPf4GCEU

We were expecting a little more enthusiasm than this from Salman. Radha Kyon Gori Main Kyon Kaala is being directed by Prem R Soni. The director has previously made movies like Preity Zinta's Ishkq in Paris and Salman Khan's Main Aur Mrs Khanna. The movie stars Jimmy Sheirgill as the male lead.

Iulia has earlier starred in a special song, Ummbakkum, in the film, O Teri. She has also sung two songs for the Salman Khan film, Race 3. And a promotional track for the film Sultan also featured her voice. We are definitely looking forward to seeing her make her acting debut in Bollywood. Maybe soon enough, we will see her act opposite Salman in a film?