Salman Khan’s Actioner Radhe: Your Most Wanted Bhai’s Trailer To Be Unveiled in the First Week of April – Reports

Superstar Salman Khan's upcoming film Radhe: Your Most Wanted Bhai is one of the most anticipated projects of 2021. As per reports, the makers of the actioner are all set to drop the first official trailer of the flick in April. Are you excited? 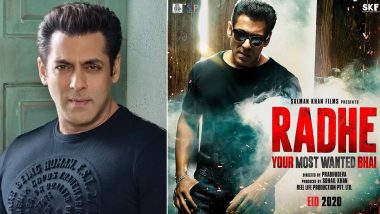 Superstar Salman Khan's upcoming film Radhe: Your Most Wanted Bhai is one of the most anticipated projects of 2021. The Eid release is expected to revive the theatre business after the coronavirus as well as lockdown mayhem last year. Having said that, fans have been eagerly waiting for a glimpse of the actioner. Earlier, it was reported that Radhe's trailer will drop in March end. But, as per the latest update in Bollywood Hungama, it will be out in the first week of April. Radhe: Salman Khan Starrer To Release In Theatres During Eid This Year, Confirms The Superstar.

“The plans to release the teaser have been dropped. The makers would now directly unveil the trailer of the film. It is expected to release in the first week of April. The first look, which was launched exactly two months before the film’s release, on March 13, got a great response. The makers are confident that the trailer would considerably enhance the buzz of the film," the source told the portal.

The source added, “The theatrical trailer is very well-cut. It comprises all the massy elements of the film right from Salman’s dialoguebaazi, action, rivalry with Randeep Hooda, romance with Disha Patani, etc. Salman Khan’s fans are in for a treat this Eid.” Radhe – Your Most Wanted Bhai: Salman Khan Abides by His Eid Release Commitment, Film To Arrive in Theatres on May 13.

While many filmmakers have rescheduled the release date of their films owing to the rising coronavirus cases in India, the makers of Radhe are in no mood to do so. "As of now, everything is as per the schedule. There are no talks of any postponement. Radhe - Your Most Wanted Bhai arrives on Eid," the source said. This Salman Khan thriller releases in cinemas on May 13 and also stars Disha Patani, Jackie Shroff and Randeep Hooda in key roles.

(The above story first appeared on LatestLY on Mar 23, 2021 09:28 AM IST. For more news and updates on politics, world, sports, entertainment and lifestyle, log on to our website latestly.com).