Just in case, you want to know all things about Sandeep Aur Pinky Faraar, before the flick makes it to the silver screen on March 19, here is everything you need to know about it. The movie features Arjun as Pinkesh Dahiya and Parineeti as Sandeep Kaur. Check it out. 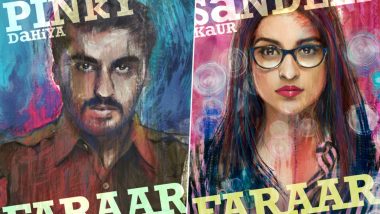 Janhvi Kapoor's Roohi which released on March 11 was the first theatrical release of the year consisting of A-list actors amid the pandemic. Even though COVID-19 is still in the air, moviegoers are going to the cinemas and watching the flick and Roohi's decent box office collection is proof. Up next, we have Arjun Kapoor and Parineeti Chopra-starrer Sandeep Aur Pinky Faraar, which is all set to hit the silver screens on March 19. Helmed by Dibakar Banerjee, the release of the movie has been postponed multiple times. Sandeep Aur Pinky Faraar: Arjun Kapoor Reveals Why He Was Slapped Yet Again by Parineeti Chopra.

Just in case, you want to know all things about this Bollywood film, just before it makes it to the silver screen, here is everything you need to know about Sandeep Aur Pinky Faraar below. This film happens to be Arjun and Parineeti's third film together after Ishaqzaade (2012) and Namaste England (2018). Sandeep Aur Pinky Faraar Trailer: Parineeti Chopra Gets a Thumbs Up but the Trailer Receives Mixed Reactions from Twitterati.

SAPF is a dark comedy and thriller. In case, you are wondering what's the story of the film? Then as per IMDb's synopsis, it's "a story of a man and woman who represent two completely different Indias. They are united in one thing only. Their mistrust, suspicion, and hate for each other."

Nothing can be said at such grim times amid the pandemic, but a decent opening is expected from the film. However, this one is going to get a tough competition from John Abraham and Emraan Hashmi's Mumbai Saga that is releasing on the same day as Sandeep Aur Pinky Faraar. This may adversely affect the film's BO business for sure. Having said that, LatestLY predicts Rs 3-4 crore business on its first day.

Early reviews of Sandeep Aur Pinky Faraar are not. Click here to read what fans have to say about the movie.

(The above story first appeared on LatestLY on Mar 17, 2021 03:32 PM IST. For more news and updates on politics, world, sports, entertainment and lifestyle, log on to our website latestly.com).