Satyameva Jayate 2 is the sequel to the successful 2018 vigilante actioner Satyameva Jayate. The film helmed by Milap Milan Zaveri and produced by T-Series and Emmay Entertainment is set to hit cinemas on November 25. 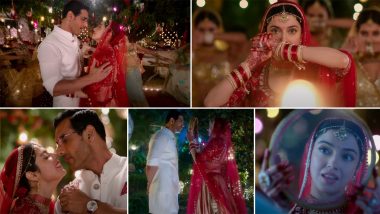 'Satyameva Jayate 2' starring John Abraham is one of the most eagerly awaited films of the year. After a thundering response to the film's high-octane trailer, the makers have now released the first song titled, 'Meri Zindagi Hai Tu'. The romantic number is brought to life by the beautiful chemistry between John and Divya. The song talks about the expression of love in the purest form with Jubin Nautiyal and Neeti Mohan lending their voices to the melody. The song has been composed by Rochak Kohli with lyrics penned by Manoj Muntashir. John Abraham’s Satyameva Jayate 2 Release Preponed To November 25; Film’s Trailer To Be Out On October 25.

'Meri Zindagi Hai Tu' happens to be John's favourite track from the film's album as he says, "Meri Zindagi just touches your heart. I fell in love with the song instantly when I heard it for the first time. Even while shooting for this romantic number, I had an amazing time with Divya on set. Jubin Nautiyal and Neeti Mohan's vocals with Manoj Muntashir's words, it couldn't get any better." Its a Wrap for John Abraham’s Satyameva Jayate 2; Milap Zaveri Directorial Currently in Post-Production Stage.

Talking about the song, Divya said, "Meri Zindagi Hai Tu is a song that is pure romance and all things love. It is one of the most passionate and romantic numbers I have shot for and it will definitely play on loop in your minds and hearts." Director Milap Zaveri adds, "John and Divya's screen presence in 'Meri Zindagi Hai Tu' is something to look out for. It's the perfect romantic track to portray the love their characters share."

'Satyameva Jayate 2' is the sequel to the successful 2018 vigilante actioner 'Satyameva Jayate'. The film helmed by Milap Milan Zaveri and produced by T-Series and Emmay Entertainment is set to hit cinemas on November 25.

(The above story first appeared on LatestLY on Oct 28, 2021 06:42 PM IST. For more news and updates on politics, world, sports, entertainment and lifestyle, log on to our website latestly.com).