Shah Rukh Khan Birthday Special: How King Khan Promoted Patriotism and Inclusivity in His Movies Right From Start Without the Need To Seek Validation! (LatestLY Exclusive)

Having followed SRK's movie choices, be it the good (Swades), the bad (HNY), and the very much ugly (Guddu, Zamaana Deewana, English Babu Desi Mem) - I have to say that Shah Rukh Khan has done his share of nationalism in movies, perhaps even more than his peers. Only that we never stopped to think and notice it, like some of the recent 'josh' wale movies. 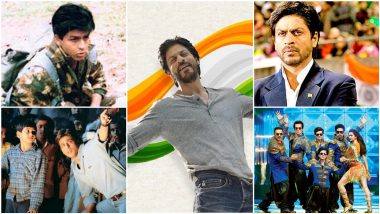 Shah Rukh Khan is going through some very rough times, be it in his career, in personal life or perception-wise. His last movie came out in 2018 - Zero-  an under-performer at the box office. Since Dilwale, his films have not been working as expected from a superstar of his stature. Personally, he and his family are going through a different crisis, as his eldest son Aryan Khan has been accused of possession and consumption of narcotics, though he has been recently released on bail by the Bombay HC (at the time of writing this article). Shah Rukh Khan Birthday Special: Five Actresses Whose Pairing With The Actor Left Us Wanting For More.

And there is the perception problem. Most probably for the religious identity attached to his surname, Shah Rukh Khan's patriotism has often been questioned by his detractors, including a very controversial news channel. His critics often question his sense of belonging, his movies keep facing roadblocks during release, and people still question his patriotism over his 2015's 'rising intolerance' statement (thereby also proving his point right).

Whenever I talk to some of his detractors, they often question his movie choices. Like, why can't Shah Rukh Khan not do more patriotic movies like Chak De India!, like some of his peers? The prime examples of his competitors that are often raised as examples are Akshay Kumar and Ajay Devgn, with Salman Khan occasionally entering the conversations.

But is that a true argument? Has Chak De! India been the only patriotic movie that Shah Rukh Khan has done? Which btw is more of a sports film with undercurrents of nationalism than a straightaway nationalistic saga.

Going back to the question, I have to say having followed Bollywood for long, especially SRK's movie choices, be it the good (Swades), the bad (HNY), and the very much ugly (Guddu, Zamaana Deewana, English Babu Desi Mem) - I have to say that Shah Rukh Khan has done his share of nationalism in movies, perhaps even more than his peers. Only that we never stopped to think and notice it, like some of the recent 'josh' wale movies.

Let's have a walk down the memory lane, will ya?

Starting off with where SRK got his first stab at popularity, which came with the DD series, Fauji. His role of Abhimanyu Rai had him play a soldier in the Indian army. Way to kickstart your career with a dash of patriotism. Throwback To the Time When Shah Rukh Khan Was Chased With A Rock By His Fauji Director Colonel Raj Kapoor.

Coming to his movies, let's talk about Ketan Mehta's Oh Darling! Yeh Hai India! A satire, it had Shah Rukh Khan playing a struggler who tries to stop the villain from selling the country to terrorists. There is also a song in the film that celebrates the quirky diversity of this country.

Don't feel satire makes for patriotism. What about Dilwale Dulhania Le Jayenge, SRK's longest running hit, that has his Raj come to India and refuse to elope with Simran, because that's not the sanskar.  Who said nationalism has to be about mouthing patriotic lines to the enemy? Nationalism can also be about winning over people with love and traditions.

Pardes might feel cringe on recent watches (but so are many of our recent movies these days) in how it tries to show desi is better than videshi. Still this Subhash Ghai film, starring Shah Rukh Khan in the lead, does score points for promoting nationalism.

Karan Johar's debut Kuch Kuch Hota Hai may have nothing to do with nationalism, but still there is a comical scene of Anjali and Daadi replacing the Union Jack with National tricolour at the summer camp (wonder if Johnny Lever's character went on to join the RSS).

In the forgotten revenge thriller called Army, Shah Rukh Khan once again returned to playing an Indian army commando in an extended cameo. Phir Bhi Dil Hai Hindustani, Shah Rukh Khan's first home-production, was a satire on media. While it was a very flawed movie, the themes it presented are very resonant in these times, like branding an innocent as a terrorist, media trials and manufactured new. The climax of the film sees Shah Rukh Khan and Juhi Chawla's character lead a crowd of protesting citizens to save an innocent man from being hanged to death. And what's in their hand? The tiranga! Five Shah Rukh Khan ‘Flops’ That Now Feel Way Ahead of Its Times as We Rewatch Them in 2020.

Kamal Haasan's alt-historical drama, Hey Ram, sees Shah Rukh Khan make his Tamil debut as Amjad Khan, the Pathan friend of its troubled protagonist Saket Ram. While only an extended cameo, the superstar leaves an impact in his second appearance in the movie, trying to save his folks from angry Hindu rioters, while also teaching his brainwashed friend why this country belongs to people of his religion too. Is Shah Rukh Khan a ‘Lucky Charm’ When It Comes to Cameos? The Answer Is, Sadly, NO, and We Have Proof!

Karan Johar's second directorial Kabhi Khushi Kabhie Gham also has dashes of nationalism mostly through Kajol's patriotism spouting character, even though many of the scenes are set in UK. Let's not forget the scene of Hrithik Roshan's character searching for his elder brother in London. while "Vande Mataram" plays in the background. Or Shah Rukh Khan and Kajol's son surprises them with his singing of the national anthem that even makes the goras stand in respect? Cheesy, sure, but very Bollywood-y fun!

From a KJo directorial to a KJo production, Kal Ho Naa Ho once again has scenes of NRI diaspora and their love for everything desi. Memorable is the scene where Shah Rukh Khan's Aman inspired Jaya Bachchan's Jenny to remodel her dying restaurant to have a desi swag, to the tune of Lagaan's "Chale Chalo" and thus bringing in more customers, 'cos they brought their desh to New York!

The thing with Shah Rukh Khan's 'patriotic' movies/roles is that the countryhood comes with a sense of brotherhood. Main Hoon Na sees him play an army major who has to prevent a gang of insurgents out to stop a peace broker between India and Pakistan. Guess this movie would have faced a lot of flak if it came out in these times.

In Yash Chopra's Veer-Zara, Shah Rukh Khan plays a braveheart Indian Air Force pilot in love for his desh, that remains with him even when he is incarcerated in a Pakistani jail for more than two decades. But without hating the country that falsely imprisoned him for so many years. 27 Years of Shah Rukh Khan: From Deewana to Zero, 27 Most Iconic Scenes in King Khan’s Epic Career.

Swades may not have jingoistic dialogues or blind nationalism, but that doesn't stop it from being one of the most patriotic films made in this country. The film understands that your love for your country shouldn't be blinded by the problems that stop it from making it the greatest in the world. The endeavors of Shah Rukh Khan's NASA scientist Mohan Bhargava was so inspirational that it even motivated a few NRI's to return to their country and help their villages. And to think, this movie tanked at the box office when released!

Of course, I don't need to remind you why Chak De! India's title song continues to be played during Indian team matches. Arguably, one of the best sports film made in India, if not the best, Chak De! India recently came into conversations when like its protagonist, Kabir Khan, even the lead star's love for the nation has been incessantly questioned.

My Name Is Khan, Karan Johar's third film as the director (and also his most mature) may not be about patriotism, but it does address the problems faced by the Indian expatriates in United States of America, following the 26/11 attacks. The movie also sees his character questioning the fake peddlers of his own religion to incite hatred and malice.

Jab Tak Hai Jaan has Shah Rukh Khan's character challenge God, and in that sense Katrina Kaif's fear that he will be killed if he is with her, to keep him alive, and for that he goes and joins in the Indian army's bomb disposal squad. Chucking aside the question of how easily he got into the army, let's admire his defiance of his mortality also came with a patriotic fervour. Instead of, you know, joining Khatron Ke Khiladi!

Rohit Shetty's Chennai Express, starring Shah Rukh Khan and Deepika Padukone, seeks its comedy in South caricatures. But there is a fun, colourful song "Kashmir Main Tu Kanyakumari" that is about closing the North-South divide.

Farah Khan's Happy New Year is a silly heist film that comes with own nationalistic trope when Shah Rukh Khan and gang represents the country in World Dance contest. As silly as it sounds, there is a very infectious "Hum India Walle" song in there!

So why does Shah Rukh Khan's name never features when it comes to Bollywood's take on nationalism and patriotism? It has more to that his films, when they indulge in these sentiments, either take a light-hearted or cheesy tone (the KJo films), or comes with a sense of brotherhood and responsibility that, for some, are difficult to understand and emulate these days. In that way, like the popular characters of the King of Romance, even his movie believe in nationalism that comes out of love and belonging than in hating someone to be proud of your nation. In a way, Shah Rukh Khan taught us it is cool to be patriotic without us realising it.

(The above story first appeared on LatestLY on Nov 02, 2021 12:00 AM IST. For more news and updates on politics, world, sports, entertainment and lifestyle, log on to our website latestly.com).