The pictures of King Khan shooting for something went viral on the internet. He is seen enacting a monologue or a song may be, in front of the cameras set up in his balcony. 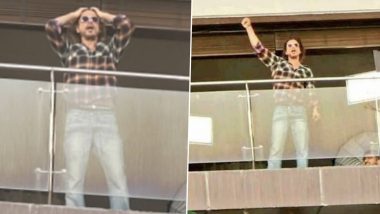 It feels like forever since fans got to see Shah Rukh Khan on the silver screen. Before the COVID-19 pandemic phase, he was atleast spotted off-screen through events and other such sneak peeks. However, since lockdown began, the SRKians have been curious about him and his much-delayed movie announcement. But now, we see that something's definitely cooking in SRK's residence, Mannat! Suhana Khan Supports Hindustan Unilever’s Decision Of Dropping ‘Fair’ From Its Iconic Brand 'Fair & Lovely' (View Post).

The pictures of King Khan shooting for something went viral on the internet. He is seen enacting a monologue or a song may be, in front of the cameras set up in his balcony. As he shot himself on the lens, he was captured by someone else and thus these videos and pics are all over the social media. He looked energetic and handsome in a chequered shirt and denims. Check out the glimpses below.

Check Out What SRK's Doing!

King Khan spotted at his balcony!

RT if you can't wait to see what it is. #ShahRukhKhan pic.twitter.com/YO3VghnFys

The superstar was last seen in Zero. Post that, he took a sabbatical and has been waiting for the right time to announce his next films. However, he has been active on social media platforms and voicing his opinions on some of the grave subjects happening in the country.  He will reportedly be seen in Ranbir Kapoor-Alia Bhatt's Brahmastra. He is reportedly a part of R Madhavan's Rocketry: The Nambi Effect as well. However, we wait to hear it from the dimpled actor himself. For now, we look forward to whatever the Badshah of Bollywood is shooting for. Any wild guess?

(The above story first appeared on LatestLY on Jun 26, 2020 08:11 PM IST. For more news and updates on politics, world, sports, entertainment and lifestyle, log on to our website latestly.com).