Shah Rukh Khan Shares a Picture of Himself Playing Pool and It’s His Cryptic 'Pink' Message That Has Our Attention!

Shah Rukh Khan has shared a post on social media. This time the superstar posted a cryptic message about the colour pink while playing pool and we are scratching our heads, what does it mean? Check it out. 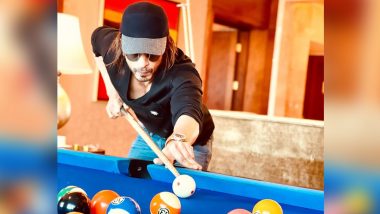 Bollywood's Badshah Shah Rukh Khan has shared a post on his social media. The last time the actor had shared something, was on the New Year's day and today (January 22), he did it again. However, this time the superstar posted a cryptic message about the colour pink and we are scratching our heads, what does it mean? SRK teased fans with a picture of his wherein he can be seen playing the game of pool, aiming at the pink ball. As soon as he made this post, netizens are impressed with his latest look. Shah Rukh Khan’s New Year Wishes Has Already Made Our 2021 ‘Bigger, Better, Brighter And More Beautiful’, Courtesy This Hilarious Video!

Right from Shah Rukh's long tresses to his beard, fans are going gaga and speculating that finally, he has made his Pathan look official. However, we are more curious about the pink reference he has made here. "As long as there is pink in the world, it will always be a better place...," he captioned the picture. Indeed, we see Khan in a never seen before avatar, but there's more to what we see.  Shah Rukh Khan Says, ‘See You All On The Big Screen In 2021’! Fans Think SRK Is Hinting About Pathan (Watch Video).

As long as there is pink in the world, it will always be a better place... pic.twitter.com/RyQm8ESUMW

Earlier to this, Shah Rukh Khan in a video message on New Year's had mentioned 'See You All On The Big Screen in 2021' and fans felt that he is hinting about his upcoming film Pathan. This one also stars Deepika Padukone, who had confirmed the same in a recent interview with Femina.

“So, I immediately started with Shakun Batra’s film, which is a relationship story that we haven’t seen in Indian cinema before. Then there is Pathan, an action film with Shah Rukh Khan, next is Nag Ashwin’s multilingual film with Prabhas,” she told to the magazine. Rumour has it that Pathan will be launched at the 50th-anniversary celebrations of YRF. Stay tuned!

(The above story first appeared on LatestLY on Jan 22, 2021 05:34 PM IST. For more news and updates on politics, world, sports, entertainment and lifestyle, log on to our website latestly.com).