Can you guess whose role was offered to Shahid Kapoor and he rejected it? 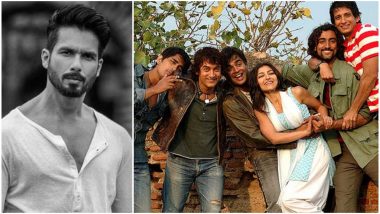 Did you know Shahid Kapoor was offered Aamir Khan's Rang De Basanti? Well, no, he wasn't offered Aamir's role but he was in fact approached to play Karan Singhania. This Rakesh Om Prakash Mehra directorial was one of the highest grosser of that time and was immensely applauded for being unconventionally patriotic. Shahid was offered the role that eventually went to Siddharth after the former's rejection. We wonder if playing a second lead was something that bothered Sasha at that time. Kabir Singh Actor Shahid Kapoor Wants to Make a Biopic on the Indian Boxer Dingko Singh.

In his recent chat with Times of India, when the Kabir Singh actor was asked about a role he regrets rejecting, Shahid mentioned Rang De Basanti. Besides Aamir Khan and Siddharth, the film also starred Kunal Kapoor, Sharman Joshi, Soha Ali Khan, Atul Kulkarni, and R Madhavan in some pivotal roles. However, the director is quite eager to work with Shahid and the reports about them collaborating for a project are doing the rounds for quite some time now. Shahid Kapoor Wants U/A Certificate for Kabir Singh, Says ‘Important to Tell Stories Without Sugar Coating’.

Earlier in his conversation with Mumbai Mirror, Mehra had confirmed the reports of working with Shahid for a new project. “Shahid and I really want to do a film together. He’s such a fabulous actor and someone I feel I would have so much fun working with. With him, it’s like finding a DNA match. Conversations are on and I think we will be able to reach a common point if things work out," he said. Let's hope this collab happens very soon as we are dying to see how its final outcome

(The above story first appeared on LatestLY on Jun 11, 2019 12:48 PM IST. For more news and updates on politics, world, sports, entertainment and lifestyle, log on to our website latestly.com).