Sherlyn Chopra Attacks Deepika Padukone Amid the Drug Probe, Asks Why Did She Need 12 Lawyers If She Didn't Consume 'Maal' 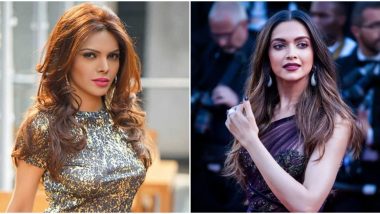 Deepika Padukone has come under the scanner in the drug probe led by the Narcotics Control Bureau (NCB). The actress was questioned by the actress on Saturday in Mumbai at the NCB Office for almost five hours. There were rumours that her husband Ranveer Singh asked to join the probe, but NCB was NCB was quick to slam speculations clarifying that no such request was made. Rumours also said that Deepika consulted a team of lawyers over video call in Goa, where she was shooting for a film, before coming to Mumbai. Attacking the actress, Sherlyn Chopra has questioned why she needed so many lawyers if she is innocent. Bollywood Drug Probe: Deepika Padukone Leaves NCB Office After 5 Hours (See Pics).

Sherlyn attacked Deepika, not just on Twitter, but also in an interview with the press. "If she doesn't consume 'maal' then why was it required to consult a legal team of 12?" Sherlyn also said that the actors in question have the civil responsibility to give up important names in the drug nexus.

In another interview with Aaj Tak, Sherlyn also claimed that Deepika was depressed because she didn't have access to 'maal'. Bollywood Drug Probe: Deepika Padukone and Other Celebs' Cars Being Chased by Media Houses Prompts Mumbai Police To Issue Stern Warning.

Sherlyn Has Been On A Tirade:

Supporters of Nashedi Gang will never understand why we choose to support Narcotics Control Bureau for the sanitisation of Bollywood and of the nation.

Roar of a Sherni @SherlynChopra 🙏

That is not all, Sherlyn also accused KWAN's founder of asking sexually inappropriate questions.

Others actresses summoned by NCB includes Rakul Preet Singh, Sara Ali Khan, Shraddha Kapoor. Rhea Chakraborty has been arrested by the NCB and put under judicial custody until October 6.

(The above story first appeared on LatestLY on Sep 26, 2020 11:08 PM IST. For more news and updates on politics, world, sports, entertainment and lifestyle, log on to our website latestly.com).