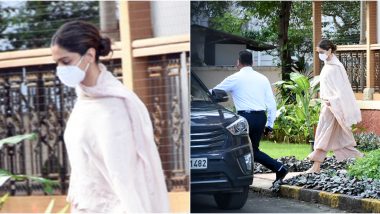 The investigation of Sushant Singh Rajput's death led to the uncovering of a drug angle. Rhea Chakraborty has been arrested by Narcotics Control Bureau (NCB). Deepika Padukone, Sara Ali Khan, Rakul Preet Singh, Shraddha Kapoor have been summoned and questioned by the NCB. The celebs' journey to the NCB office gave certain media houses and paparazzi a chance to chase their cars for exclusive footage. A video of Deepika's car being chased by a media house's car has gone viral. Taking cognizance, Mumbai Police has issued a stern warning for the media to maintain dignity and not endanger people's lives with such real-life chase sequences. Bollywood Drug Probe: Deepika Padukone Leaves NCB Office After 5 Hours (See Pics).

"Today we have observed a lot of media vehicles chasing people who were called for the inquiry. The vehicles will be seized because they are endangering their lives as well as lives of whoever was called & common people," Sangram Singh Nishandar, DCP Zone 1, Mumbai Police, told the media.

In the viral video of Deepika's car being chased, the journalist can be heard gloating about catching up the vehicle and shouting questions at the actress. Yesterday, as per reports, Rakul Preet Singh's car was also chased as she made an exit from the NCB office. Bollywood Drug Probe: Sara Ali Khan and Shraddha Kapoor Leave NCB Office (See Pics).

NCB has arrested close to 20 people in the drug probe so far. This includes 16 drug peddlers. Rhea's brother Showik has also been put under judicial custody until October 6. Late Sushant's aides, Samuel Miranda and Dipesh Sawant have also been arrested.

Sushant's family lawyer has said that the family is not happy with the focus being shifted to the drug prob from the death probe.

(The above story first appeared on LatestLY on Sep 26, 2020 10:08 PM IST. For more news and updates on politics, world, sports, entertainment and lifestyle, log on to our website latestly.com).