Shreya Ghoshal Birthday Special: Did You Know The Talented Singer Sang For Aishwarya Rai Bachchan In Devdas When She Was Just 16?

Shreya Ghoshal who will be a mother soon celebrates her birthday today. On this day, we would like to tell you that she was all of 16 when sang for Aishwarya Rai Bachchan in Devdas. Guess what was her first track as a playback singer? Shah Rukh Khan and Aishwarya's Bairi piya! 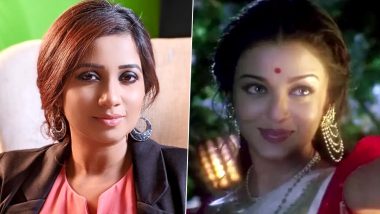 Shreya Ghoshal is one of those singers whose voice can put you in a trance. She is methodical and melodious. So many years of dedicated love for music have made her a fantastic singer. She has not only sung in Hindi but in various regional languages. But her first tryst with playback singing happened with Sanjay Leela Bhansali's Devdas and for Aishwarya Rai Bachchan. His mother had watched Sa Re Ga Ma's children special which Shreya was a part of. She had recommended Ghoshal to the filmmaker who decided to give her a chance with Devdas as he found her voice to be perfect for Paro. She was all of 16!  Shreya Ghoshal: Lockdown Gave Artists the Opportunity to Reconnect With Their Roots (LatestLY Exclusive Interview)

We all know who played Paro in Devdas, the beautiful Aishwarya Rai Bachchan. So every song of her that you hear from the song is sung by the 16-year-old Shreya with veterans like Kavita Krishnamurthy, Udit Narayan and others. The first song she sang for the film and in her career was Bairi piya starring Shah Rukh Khan and Aishwarya.

Check out Bairi Piya sung by Shreya Ghoshal in Devdas

Shreya has since then sung a lot of amazing tracks which are still heard by many music lovers. The singer will soon be welcoming a new member into her family as well.

(The above story first appeared on LatestLY on Mar 12, 2021 08:20 AM IST. For more news and updates on politics, world, sports, entertainment and lifestyle, log on to our website latestly.com).