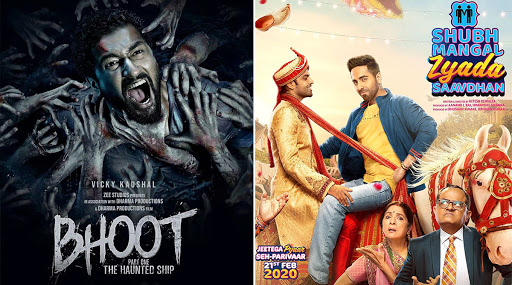 Shubh Mangal Zyada Saavdhan adds to the new era of movies that we have been witnessing for a few years now. After Fawad Khan in Kapoor And Sons and Sonam Kapoor and Regina Cassandra in Ek Ladki Ko Dekha To Aisa Laga, this movie is the third one to address the gay love story in the commercial space in recent years. Ayushmann has already established himself as a daring actor who picks socially relevant subjects and adds humour to them. That worked in this film's favour as well but it will be interesting to see what happens today as that will decide its true fate.

Bhoot Part One: The Haunted Ship is special for Dharma Productions because it is its first venture into the dark spirit world. The film saw mixed reviews as except for jump scares, the film has nothing new to offer in the genre. But horror has a loyal fan base who will check it out no matter what and on day 1, that definitely helped the movie. Here too, day 2 numbers will be crucial to see what it will be like by the end of the first three days.

The positive headstart for both the movies is going to benefit them in the long run. Opening weekend numbers will be extremely important to decide what becomes of these movies.