Sonakshi Sinha on Friday shared a sizzling throwback picture from her Maldivian vacation. The actress will be seen in Bulbul Tarang, which will have an OTT release. She is gearing up her next release Bhuj: The Pride Of India. 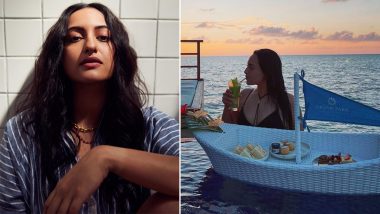 Actress Sonakshi Sinha on Friday shared a sizzling throwback picture from her Maldivian vacation.  Sonakshi posted a picture in black swimwear. She is seen standing in the pool having breakfast, against the backdrop the ocean. "Take me back," Sonakshi captioned the image, which currently has over 102K likes. Sonakshi Sinha Poses For Cosmopolitan India Magazine In a Sexy Black Dress and Offers a Strong Dose of Self-Love! (View Pic).

Sonakshi recently announced her next project. The actress will be seen in Bulbul Tarang, which will have an OTT release. The film has been directed by Shree Narayan Singh and is said to be inspired by a true story. The film also features Raj Babbar and Tahir Raj Bhasin. Pretty and Pastel! Sonakshi Sinha Looks Resplendent in her Anamika Khanna Outfit (View Pics).

Meanwhile, Sonakshi, who is known for her role in the Dabangg series, Lootera, Akira and Mission Mangal, is gearing up her next release Bhuj: The Pride Of India. Besides Sonakshi, the film will also feature Ajay Devgn, Sanjay Dutt, Sharad Kelkar, Ammy Virk, Pranitha Subhash and Nora Fatehi. The story is set against the backdrop of the Indo-Pak war of 1971.

(The above story first appeared on LatestLY on Mar 26, 2021 05:05 PM IST. For more news and updates on politics, world, sports, entertainment and lifestyle, log on to our website latestly.com).