Sonam Kapoor has been named on International Women’s Impact Report 2019. The actress has been making a big enough impact with her films such as PadMan and Ek Ladki Ko Dekha Toh Aisa Laga. 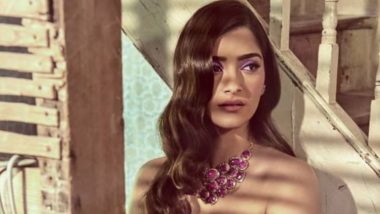 Variety releases renowned Women's Impact Report, every year, to celebrate women who have made an impact in the entertainment and lifestyle sector around the globe. In this year's report, guess which Bollywood actress has been named. It's no surprise that Sonam Kapoor Ahuja has been taking big strides when it comes to her career and now the actress has been named in this year's report as making a positive impact in a major way in Bollywood. The Ek Ladki Ko Dekha Toh Aisa Laga star has been named amongst other big names such as French Actress, Juliette Binoche, Emily Blunt, Georgia Brown, Michaela Coel, and Oscar-winning actor Olivia Colman.

Thrilled to be named on the Impact report, the actress tweeted, "Oh my god what an honour to be mentioned with these women! ☺️💗."The Chic Sonam Kapoor Gives A Powerful Fashion Statement On The Cover Of Elle Magazine - View Pic.

Oh my god what an honour to be mentioned with these women! ☺️💗 https://t.co/sJV0BfMnsD

The report introduced Sonam as, "Last year, the busy Bollywood actress starred in women-empowerment comedy “Veere di Wedding”; “Padman,” in which her character facilitates the journey of a man who makes it his life’s mission to provide affordable sanitary pads to rural Indian women; and “Sanju,” Bollywood’s highest grosser of the year. Already in 2019, she has starred in “Ek ladki ko dekha toh aisa laga,” Bollywood’s first mainstream LGBTQIA film. “Labels and stereotypes are dangerous and detrimental and it has always been my endeavor to break them,” Kapoor Ahuja tells Variety. “No effort is too small. Someday we are all just going to be memories and it’s my aim to be the best one I possibly can.”Sonam Kapoor Says 'Proud To Be Criticised' As a Response To Trolls After Sharing 'Humans Of Hindutva' Post.

On the work front, Sonam will be next seen in The Zoya Factor which is adapted from the book by the same name. The film stars Dulquer Salmaan alongside Kapoor.

(The above story first appeared on LatestLY on Mar 08, 2019 03:53 PM IST. For more news and updates on politics, world, sports, entertainment and lifestyle, log on to our website latestly.com).