Sonu Sood: ‘We Can’t Show Concern for Migrants by Sitting in AC and Tweeting’ 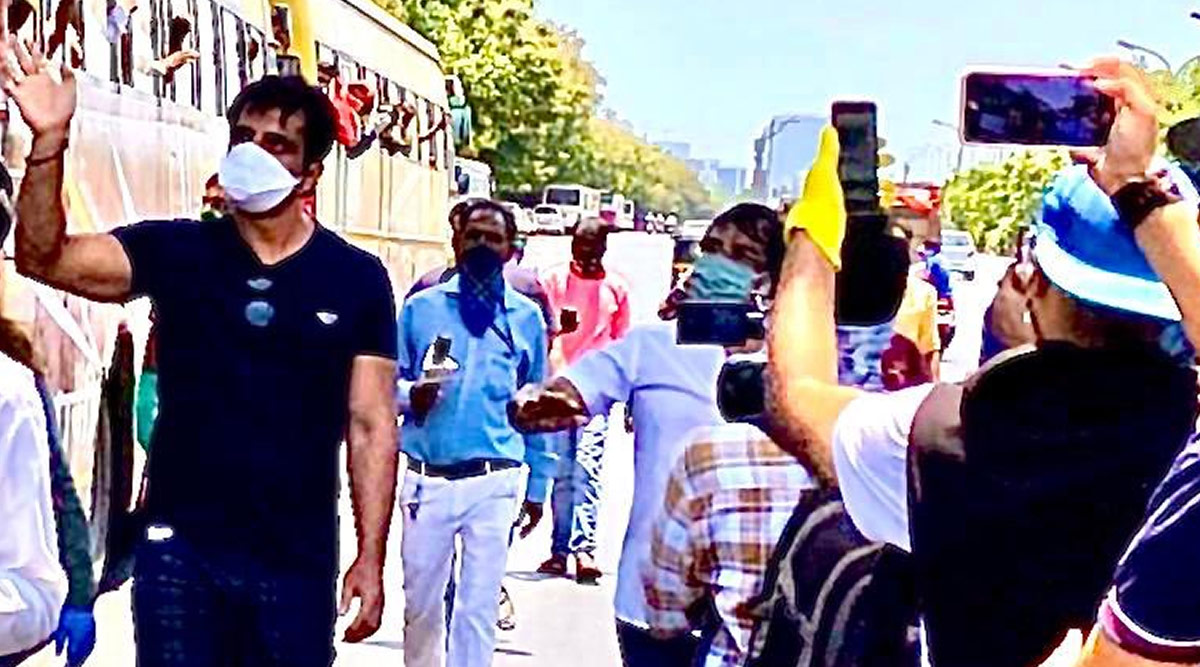 Go tell the migrant workers not to worry because Sonu Sood is there for them... Maybe the person acts in negative roles in cinemas but this man is a true 'nayok' (hero) in the real world," gushes a Facebook post written in Bangla by a student from Kolkata. Over the last couple of months, headlines like 'Sonu Sood offers his Juhu hotel for healthcare workers', 'Sonu Sood distributes food among the underprivileged', 'Sonu Sood to feed over 25,000 migrants during Ramzan' have been grabbing our attention. Recently, the actor organised buses to transport stranded migrant labourers to their hometowns, after obtaining permissions from the Maharashtra and Karnataka governments. He even went to the bus terminus to oversee their journey. Farah Khan Lauds Sonu Sood’s Kind Gesture of Arranging Buses for Migrant Labourers (Read Tweet)

"I feel it is my duty to help the migrants, the heartbeats of our country. We have seen migrants walking on the highways with their families and kids. We just can't sit in the AC and tweet and show our concern till we don't go on the roads, till we don't become one of them. Otherwise they will not have the trust that there is someone standing there for them. So I have been coordinating for their travels, for permissions from different states," Sonu Sood told IANS. Sonu Sood Arranges Bus Service for Migrant Workers Stuck in Maharashtra.

He further claimed: "Now I get so many messages and hundreds of emails everyday saying that they want to travel and I have been coordinating non-stop from the morning till the evening. This has become my only job during this lockdown. It gives me so much satisfaction that I can't express in words." He added: "When I see these migrants and all those who are suffering, I feel that we have lost the respect of being a human. I can't sleep properly in the night because the thoughts keep coming in my mind. The entire day I am reading emails, noting down their phone numbers, trying to call them. There are hundreds of them. I wish I could drive them personally to their villages day and night and reunite them with their families."

"They are the real face of India who have worked hard to build our houses. They have left their homes, their parents, their loved ones and worked so hard just for us. Today, if we are not there to support them, I think we don't have any rights to call ourselves human beings. We have to come forward and help them with the best of our abilities. We can't leave them on the streets, we can't see them dying on the highways, we can't let those little children walking with them think that there is no one for their parents," he added.

Not just migrants, Sonu Sood has been working relentlessly trying to help whoever approaches him. "You won't believe my number rings 24X7. I keep getting calls and messages for PPE kits, ration et cetera. We are supplying food, we have made stalls at the highways at Dahisar Naka and other places. The migrants who are walking, we try to convince them to stop so that we can help them board the trains. Also, we give them fruits or whatever we can for their journey," he shared.

"I feel it should be the duty of every Indian to help them (migrant workers) in whatever way they can. These are the times when you leave everything behind and come together as a family and you become one nation through which you can spread the message that don't worry, this too shall pass. Because we need to stand together and make sure that no one sleeps empty stomach in this country."

Sonu has a major regret -- that migrant workers in our society are just numbers and not names. "One thing I feel very sad about is that we just say that eight migrants died or 10 migrants died or 16 migrants were killed under a train. Why can't we put their names in the newspapers or social media? We have to consider migrants as humans, as equally important as those people killed in a plane crash whose names are mentioned in the news. We need to know who these people are, who lost their lives. We should know their names and respect them," he said.

How does he feel about all the praise is garnering for helping the needy? "People have been showering blessings from across the globe. It's overwhelming and it motivates me to work harder. I am there for them, I will be on the roads, I will leave no stone unturned day and night to be with them and make sure that every migrant reaches their destination. To the best of my abilities I will make sure it happens," concluded the actor.