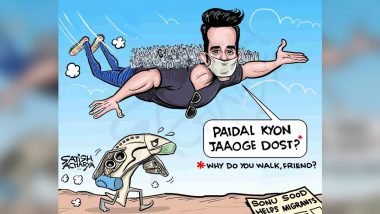 Sonu Sood is doing God's work these days, some say. But the actor has famously tweeted that he is doing human's work, the ones who did God's work are on the road. The actor has been relentlessly helping migrant labourers stuck in Mumbai during the lockdown, to reach their homes. From arranging  buses to starting a helpline, he is doing it all. Sonu Sood Shares a Video of Constant Incoming Messages Asking For Help, Apologises For The Missed Ones!

Of course, the popular villain of Bollywood had turned into a real-life hero. A popular funny tweet wonders if Akshay Kumar will play Sonu Sood in his biopic. The internet can't talk enough about Sonu. A cartoonist, Satish Acharya, has shared an artwork where he has drawn Sony carrying people on his back and flying as an aircraft watches from ground. We love this cartoon.

"There are millions of people who need help and we are trying the best we can. I don’t think we will stop till we help the last person who wants to go home. It’s hugely satisfying to reunite them with their families," Sonu has said in an interview.

"Migrant workers have helped build our roads, homes and offices. We cannot stand and watch them be homeless," he told the media.

"This mission is very close to my heart and I am emotionally connected to every single migrant who gets in touch with me. I won’t let them lose their trust in humanity and the system. The best part of this duty is that I get a good sleep no matter how many hours," Sonu said.

A Bench of the Supreme Court, on May 26, has said that there have been “inadequacies and certain lapses” on the part of the Central and State governments in dealing with the migrant labourer crisis during the lockdown. The court ordered the Centre and the States to immediately provide transport, food and shelter free of cost to the stranded migrant workers.

(The above story first appeared on LatestLY on May 27, 2020 09:08 PM IST. For more news and updates on politics, world, sports, entertainment and lifestyle, log on to our website latestly.com).