Street Dancer 3D: Varun Dhawan Flaunts His Washboard Abs and a Killer Attitude on the New Poster Ahead of Trailer Release on December 18 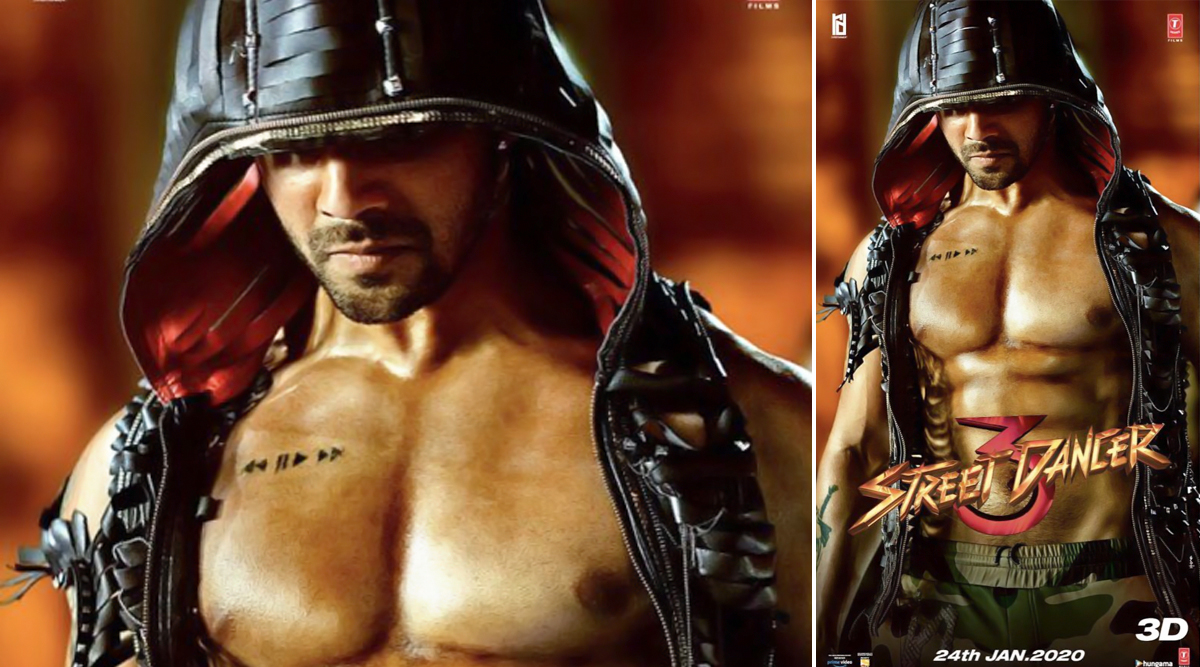 Varun Dhawan and Shraddha Kapoor's dance film Street Dancer 3D is all set to release in January 2020 but ahead of that, we will get to see the trailer of the much-awaited film next week. Yes, the trailer of Dhawan's dance film is all set to be out on December 18 and w can't wait to see it. After the success of ABCD 2 which was also Remo D'Souza's film with Varun and Shradha in lead, it looks like things will get a notch higher than before. Varun recently took to Twitter to share the poster of the film announcing the film's trailer release date.  Varun Dhawan, Shraddha Kapoor and Nora Fatehi Chill Out Together in Street Dancer 3D Wrap-Up Party – View Pic.

On the poster, Varun can be seen flaunting his washboard abs and tattoos, also the popular MJ one. Varun is seen wearing a hoodie in this poster. Shraddha too sharing the cool new poster wrote, "The battle is about to begin!! #StreetDancer3D trailer out on 18th Dec." We had earlier reported that Street Dancer's trailer is all set to be attached to Salman Khan's upcoming film Dabangg 3 which will hit the screens on December 20.

BOOM 💥 🎺🎤🎹🦍 #StreetDancer3D. Only 7️⃣ more sleeps for the trailer. Trailer out 1️⃣8️⃣dec

Earlier, speaking about the film's upcoming trailer, director Remo D'Souza was quoted saying, "There’s lots of VFX and 3D stuff is happening and right now we are all working on that. I am keen to show the trailer to everybody and have been working round the clock to get it completed by then. It will be a proper two-three minute trailer." Street Dancer 3D: Trailer of Varun Dhawan-Shraddha Kapoor Starrer to Release on December 18, Video Clip to Be Attached with Salman Khan’s Dabangg 3.

The film is not a part of the ABCD franchise. Considering its January 2020 release date, it looks like the start of 2020 is going to be packed with some big star films given that Deepika Padukone's Chhapaak, Ajay Devgn's Tanhaji: The Unsung Warrior are also slated to release in the same month. Street Dancer 3D is expected to clash with Kangana Ranaut's Panga.