Student of the Year 2: Was Karan Johar Waiting for Tiger Shroff's Baaghi 2 to Succeed Before Making The Official Announcement?

With Baaghi 2 hitting gold at the box office and giving Tiger Shroff his first Rs 100 crore hit, we now have the official announcements from Dharma about the leading ladies as well as the flagging off of the shoot. 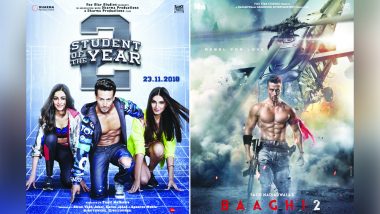 So the cast is in place and Dharma Productions is ready to roll Student of the Year 2. In a series of grand announcement, Karan Johar re-introduced Tiger Shroff as the leading man of the sequel, while introducing newbies Tara Sutaria and Ananya Pandey as the female leads. Tara Sutaria is quite popular for her Disney shows while Ananya is the daughter of the actor Chunky Pandey. The movie is directed by Punit Malhotra and the shoot has already begun in Dehradun. So all in all, some exciting development for all Karan Johar admirers and for those who loved the first Student of the Year movie.

Now Student of the Year 2 has been a long gestating project for almost two years. Karan Johar had announced it way back in August 2016, revealing Tiger Shroff as the male lead. So what made it take two years for the movie to get started? Why did KJo take so much time to announce the female leads? We think it has something to do with Baaghi 2.

When Student of the Year 2 was announced, Tiger Shroff was fresh off the success of the first Baaghi movie and was considered a hot property. The SOTY2 announcement was made during Independence Day weekend in August 2016. Two weeks later, Tiger Shroff's A Flying Jatt came out and was a dud at the box office. Suddenly, people began to question his box office credibility.

There were also reports that Karan Johar was finding it difficult to rope in the right star kids for the female leads. There were speculations that Janhvi Kapoor and Sara Ali Khan were considered for these roles, though there was no official confirmation on this.

Then Tiger Shroff's Munna Michael came out last year, and even that tanked. Inside sources claim that the makers of Student of the Year 2 were now in a fix about making the movie with Tiger in the lead, after those back-to-back debacles. Other reports state that parents of certain star-debutantes were not willing to risk making their launchpads opposite an actor with doubtful box office pull. There were even talks that the movie might be shelved.

But Dharma Productions stuck to Tiger Shroff, releasing new posters of his from time to time. However, they were holding back the shoot of the movie, even though they declared the release date (November 2018). The reason cited was finding the right female leads. But then, the names of Tara and Ananya as the heroines of SOTY 2 have been doing rounds for the past six months or so. So what was causing the delay?

Things began to show some development when the first trailer of Baaghi 2 came out and was met with quite an applause. Suddenly the details of the shoot as well as the confirmation of the release date came in. We recently had pictures of Ananya Pandey and director Punit Malhotra leaving for Dehradun to shoot for Student of the year 2, which coincidentally happened after Baaghi 2 came out in theatres.

And now with Baaghi 2 hitting gold at the box office and giving Tiger Shroff his first Rs 100 crore hit, we now have the official announcements from Dharma about the leading ladies as well as the flagging off of the shoot. Therefore, we can't help but wonder if Baaghi 2's success had a direct link to the commencement of Student of the Year 2 shoot. Also if Baaghi 2 had failed to work at the box office, would SOTY 2 be happening?

(The above story first appeared on LatestLY on Apr 11, 2018 01:42 PM IST. For more news and updates on politics, world, sports, entertainment and lifestyle, log on to our website latestly.com).

Comments
Tags:
Ananya Pandey Baaghi Baaghi 2 Student of the Year Student Of The Year 2 Tara Sutaria Tiger Shroff
Comments
You might also like