Sushant Singh Rajput Death Probe: ED Reveals the EMI of Ankita Lokhande's Previous Flat was Deducted from the Actor's Account, It was also Registered Under His Name

As per ED, the flat where Sushant Singh Rajput's friend and Ankita Lokhande used to reside was registered under the late actor's name and the EMI of which was also deducted from his account. 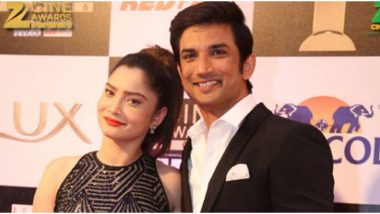 It's been exactly two months since Sushant Singh Rajput's tragic demise and the investigation into which is still underway. While Bihar Police were briefly involved in this investigation, the matter was soon handed over to CBI from their end. Meanwhile, Enforcement Directorate is also conducting its own investigation on the money laundering charges against Rhea Chakraborty. While the actress and her family were summoned multiple times by the ED, they have now made a new revelation in Ankita Lokhande's case. This Video Of Sushant Singh Rajput Singing Shree Krishna Govind Hare Murari Is Going Viral.

As per ED, the flat where Sushant Singh Rajput's friend and Ankita Lokhande used to reside was registered under the late actor's name and the EMI of which was also deducted from his account. This is probably the Malad residence that they're referring to. Sushant and Ankita stayed there together before they split up. Post which, she went to stay at a different property and Sushant shifted his base to Bandra.  This information was highlighted when ED demanded details of his bank statements along with their further investigations. Sushant Singh Rajput Case: ED Finds No Big Transfer Between SSR and Rhea Chakraborty’s Bank Accounts.

EMI of a flat where #SushantSinghRajput's friend and actor Ankita Lokhande used to stay, was deducted from Sushant's bank account. This flat is registered in Sushant's name: ED (Enforcement Directorate) Officer pic.twitter.com/ZusHOFIJaw

Sushant's death probe is getting murkier and intense with each passing day. While his family is firm on getting CBI involved in the investigation, Mumbai Police is unwilling to hand over the matter.

For more regular updates on the actor's death investigation, stay tuned to LatestLY.

(The above story first appeared on LatestLY on Aug 14, 2020 09:10 PM IST. For more news and updates on politics, world, sports, entertainment and lifestyle, log on to our website latestly.com).