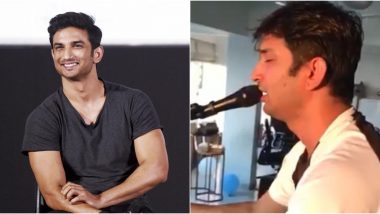 It has been two months today since Sushant Singh Rajput passed away. Questions about his death have only led to more questions so far. The fans of the actor have united to bring him justice and are demanding a CBI inquiry. Posts about Sushant are aplenty on social media. This is a movement. Today, the internet is busy talking about a throwback video of the actor singing Lord Krisha's bhajan, "Shree Krishna Govind Hare Murari". The video is going viral on the internet just two days after Krishna Janmashtami. Sushant Singh Rajput Case: ED Finds No Big Transfer Between SSR and Rhea Chakraborty’s Bank Accounts.

Sushant was a fantastic actor. He has starred in underrated gems like Detective Byomklesh Bakshy and Sonchiriya as well as blockbusters like Chhichhore and MS Dhoni. We knew he was a strong actor. Now, we learn that he was a decent singer as well. Sushant Singh Rajput Dancing With Siddhant Chaturvedi on Katrina Kaif's Chikni Chameli Will Make You Emotional [Watch Video].

Check Out Some of The Tweets Here:

Louder For The People In The Back

Sushant's family members, as well as his ex-girlfriends, Kriti Sanon and Ankita Lokhande, have demanded a CBI enquiry. Currently, the case is under Mumbai police's jurisdiction who are not ready to hand over the case to the CBI.

(The above story first appeared on LatestLY on Aug 14, 2020 05:33 PM IST. For more news and updates on politics, world, sports, entertainment and lifestyle, log on to our website latestly.com).