The ratings soared quickly and overnight after the film hit the digital platform at 7.30 pm. 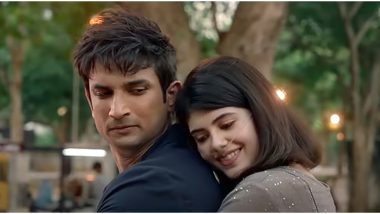 Sushant Singh Rajput's last film, Dil Bechara has been much awaited by the fans. The actor's last screen presence was welcomed with a heavy heart by the fans. The film that also stars Sanjana Sanghi in the lead, started streaming on Disney+ Hotstar on 24 July 2020. The fans are overwhelmed with the performances and the touching story. Especially, being Sushant's last movie, it received enormous response from the audience. Owing to that, the IMDb ratings of the same have reached sky high, breaking record and making it the highest rated Indian film on IMDb ever. Dil Bechara Movie Review: Sushant Singh Rajput's Final Film Is Entertaining Yet Soothing Balm for Aching Hearts.

At the time of writing this article, the IMDb rating for the film stands at 9.8/10. The ratings soared quickly and overnight after the film hit the digital platform at 7.30 pm.

The fans were moved by the dialogues of the movie and not to forget, Saif Ali Khan's cameo. The actor was hailed for his short but impressive dialogue delivery in this movie. The fans also loved Sanjana's performance in her debut movie as a lead actress. It was indeed an emotional visual ride for the audience to watch Sushant for one last time!

(The above story first appeared on LatestLY on Jul 25, 2020 12:56 PM IST. For more news and updates on politics, world, sports, entertainment and lifestyle, log on to our website latestly.com).