Now, Swara Bhasker has also reacted to Kangana's allegations. Just like Taapsee, Swara first joked about the topic. She wrote, "Net net I think this was a compliment! Thanks Kangana! I think u are gorgeous, generous & a great actor ! Shine on #KanganaSpeaksToArnab #Nepotism @KanganaTeam," 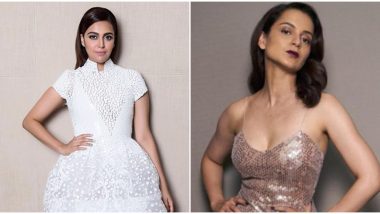 Kangana Ranaut has ruffled a few feathers in the Hindi film industry. The actress, in a scathing interview with Republic, called out Bollywood 'mafia'. In the bid, she also clapped back at Swara Bhasker and Taapsee Pannu for accusing them of bootlicking . "If you both love Karan Johar, why are you both B-grade actresses? You both are better looking than Alia Bhatt and Ananya. You both are better actresses. Why don't you get work?" Kangana Ranaut 'Willing' to Return her Padma Shri Award if Her Claims About Sushant Singh Rajput's Death Don't Come True.

Reacting to the statement, Taapsee jokingly tweeted that like school a grading system has been issued in the film industry as well. In an interview with Hindustan Times, she said that she refuses to be bitter.

Now, Swara Bhasker has also reacted to Kangana's allegations. Just like Taapsee, Swara first joked about the topic. She wrote, "Net net I think this was a compliment! Thanks Kangana! I think u are gorgeous, generous & a great actor ! Shine on #KanganaSpeaksToArnab #Nepotism @KanganaTeam,"

Further, she retweeted Taapsee's interview with Hindustan Times and wrote, "Very well said Taapsee. On point as always" Taapsee Pannu Slams Kangana Ranaut for Discrediting Her Hard Work and Blames Her for Taking Advantage of Someone’s Death for Personal Vendetta.

Taapsee has said, "We all have had good and bad experiences, but many of us refuse to let negativity drive us. It’s our positive hope and the ability to make lemonade out of the lemons thrown at us that has gotten us to where we are. I am not going to give into this negativity and hatred because this limits my growth as a human being. Kangana has the right to have an opinion and so do I. And just because my opinion doesn’t match hers, doesn’t make me inferior."

"I did speak up when I was wrongfully replaced in Pati Patni Aur Woh. I called out a wrong practice and had the director of the film supporting me then," she added.

Simi Garewal has praised Kangana for being braver and bolder, adding that the people tried to sabotage her career back in the days.

(The above story first appeared on LatestLY on Jul 19, 2020 06:26 PM IST. For more news and updates on politics, world, sports, entertainment and lifestyle, log on to our website latestly.com).