Anil Kapoor, Harsh Varrdhan Kapoor and Fatima Sana Shaikh-starrer Thar was released on Netflix on May 6. Having said that, sadly the film is the latest victim of piracy, as it has been leaked online for free watch and download. 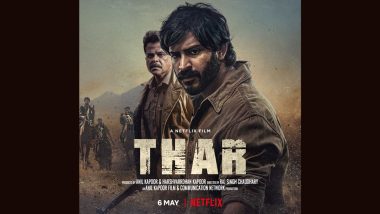 Anil Kapoor, Harsh Varrdhan Kapoor and Fatima Sana Shaikh-starrer Thar was released on Netflix on May 6. Helmed by Raj Singh Chaudhary, the synopsis of the movie reads, "A veteran cop sees the chance to prove himself when murder and a stranger's grisly torture plot shake the walls of a sleepy desert town." Having said that, as per the reviews, the crime-thriller flick has garnered mixed reactions from the critics and netizens. However, unfortunately, within a few hours after its release on the OTT platform, Thar got leaked online. The movie is now available for streaming on torrent sites. There's an HD print available of the film to watch online. Thar Movie Review: Anil Kapoor and Harsh Varrdhan Kapoor’s Netflix Film Works for Its Noirish Western Elements Despite Predictable Screenplay.

However, this is not the first time, a film has been leaked and surfaced online for download and free watch. Unfortunately, every movie falls prey to this chaos. In the past, many strict actions were taken against these pirated sites, but even after getting blocked, the websites bounce back promoting piracy. This needs severe action by the cyber cell. This really needs to be stopped with hard steps in future. Thar Review: Anil Kapoor, Harsh Varrdhan Kapoor, Fatima Sana Shaikh’s Netflix Crime-Thriller Gets Lauded by Critics.

(The above story first appeared on LatestLY on May 06, 2022 04:58 PM IST. For more news and updates on politics, world, sports, entertainment and lifestyle, log on to our website latestly.com).